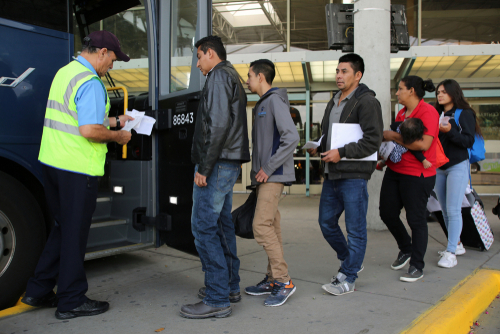 Officials in Philadelphia are getting ready to receive busloads of migrants from Texas if Gov. Greg Abbott chooses Philadelphia as the next stop for migrants who are bused to sanctuary cities run by Democrats. Kevin Lessard, a spoke person for Democratic Mayor Jim Kenney, told Axios that the city is making a list of resources in case people looking for safe refuge end up in Philadelphia.

No one has confirmed that buses carrying people from Texas will go to Philadelphia. Axios said Kenney’s office doesn’t think there will be any notice if buses are sent to the City of Brotherly Love.

Since April, the Republican governor of Texas, Greg Abbott, has sent buses with more than 7,600 migrants to Washington, D.C. The governor started sending migrants on buses to New York City at the beginning of last month, and at the end of August, he sent buses to Chicago. Fox News Digital has said that about 1,900 migrants have been bused to New York City so far.

When Fox News Digital asked Abbott’s office if buses would be sent to Philadelphia, they didn’t answer immediately. When asked what other cities will see buses of migrants, Abbott’s spokesperson told Axios to “stay tuned.”

Conservative leaders across the country and in border states have criticized President Biden for his immigration policies during the crisis at the border. These policies include ending the Trump administration’s “Remain in Mexico” policy, announcing a plan that ultimately failed to give citizenship to 11 million illegal immigrants at the start of his presidency, and easing up on border enforcement.

President Biden has yet to visit the southern border of Texas, Arizona, or New Mexico to see how bad the crisis he is causing. His “Border Czar,” Vice President Kamala Harris, has also not done much to deal with the seriousness of the situation, except for one visit to the El Paso sector over a year ago. Recently, U.S. Department of Homeland Security Secretary Alejandro Mayorkas said that the southern border is “safe and secure,” even though thousands of illegal immigrants cross it every day.

Abbott and his office have said many times that Democratic leaders who disagree with the idea of busing migrants should talk to President Joe Biden about how to keep the border safe.

If D.C. Mayor Muriel Bowser wants a solution to this crisis, she should urge President Biden to secure the border, which he has not done. The governor’s office said the ongoing humanitarian crisis is along our southern border in July in response to criticism from the D.C. mayor. Mayor.

Lightfoot said at a press conference last Sunday, “He says he is a Christian.”  Lightfoot claims that this is not the Christianity and Bible teachings she knows, and she believes religious leaders all over the country are speaking out against it.

Abbott’s office told Fox News Digital last week that attacking the governor’s commitment to his faith is a pathetic political ploy to change the conversation away from Mayor Lightfoot’s refusal to uphold her city’s self-declared sanctuary status.