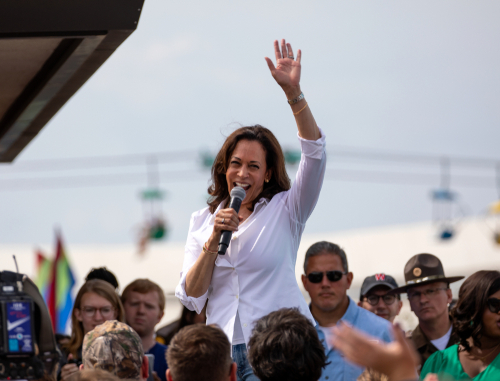 Americans alarmed by President Joe Biden’s apparent hunt for a deceased congresswoman on Wednesday had an additional reason to be concerned on Thursday. Standing on the international stage, near the world’s most strongly protected border, Vice President Kamala Harris made a slip of the tongue that would have gotten her shredded by the mainstream media if she had an “R” (Republican) behind her name instead of a “D” (Democrat).

However, with Biden’s worrisome mental breakdown still echoing, Harris’ gaffe is mostly being ignored by the mainstream media and hushed up by the White House.

Standing at the Demilitarized Zone between North and South Korea — two nations still officially at war after a 1953 armistice ended three years of fighting — the United States vice president proclaimed her country in “alliance” with the utterly wrong side. “The United States has a very important relationship with the Republic of North Korea,” Harris explained. She added that it is a powerful and long-lasting alliance.

Unless there has been a significant shift in decades of US policy on the Korean Peninsula, Harris meant “the Republic of Korea,” which is South Korea’s official name. The Democratic People’s Republic of Korea is North Korea’s official name. (Note that neither side recognizes the geographical split; both claim control over all of Korea.) But it’s the type of stupid gaffe no American official should make in a part of the globe where open combat is a constant threat. Even while the mainstream media has remained silent, the word circulated swiftly on social media.

“Please tell me this is a profound fake,” Monica Crowley, a Fox News analyst who worked in Trump’s administration, commented. It wasn’t fake. Harris said what she said, and the video tells the truth.

However, a trusting reader would not notice this from the White House’s official version of the comments, which removes the awkward “North” from the phrase.

The White House removes Kamala Harris’s gaffe about North Korea from the official transcript. That is a dishonest shift from the White House’s customary procedure in dealing with Biden’s far more regular gaffes. In those circumstances, the transcripts frequently include crossed-out words and explanatory brackets to inform the American public and the world at large that the president of the United States’ words are frequently not worth the paper they’re written on.

Meanwhile, the mainstream media has been deafeningly silent on Harris’ mistake. Of course, conservative sources such as The Washington Times, The New York Post, and Fox News reported it, but don’t expect it to be mentioned on any of the non-Fox networks’ nightly newscasts.

And the reaction would have been exactly the opposite if it had been, say, if former Vice President Mike Pence inadvertently cited a US “alliance” with the crazed Hermit Kingdom that is not only nuclear-armed and run by a dynastic scion of questionable sanity but also periodically threatens the peace of its region and the world with ballistic-missile tantrums. Then Americans would hear about it for hours and hours.

If Americans observed President Donald Trump searching a room in late September for a congresswoman who died in an auto accident in early August, the calls for removal under the 25th Amendment would be deafening.

The fact is that there is a president in the White House who has forgotten that his political companion has died. His understudy is a vice president with a well-deserved reputation for spewing gibberish.

Americans aren’t getting the truth from the institutions and organizations they should be able to rely on. That latter aspect is the most concerning for a democratic republic whose whole existence is dependent on an informed electorate.