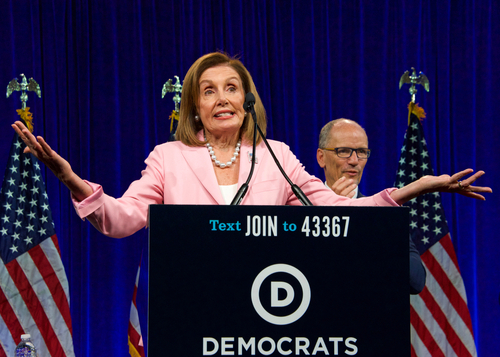 Some users believed Pelosi’s comments were degrading to migrants and that she explicitly confessed that the United States needed to let illegal immigrants into the country and profit off them.

During a news conference on Friday, Pelosi raged against southern governors’ plans to relocate illegal immigrants to northern areas, arguing that these individuals should be allowed to remain in their own regions and harvest the crops down here.

The remark was unmistakably intended as a jab at Florida’s Republican governor, Ron DeSantis, for his decision to fly two aircrafts packed with illegal immigrants from Florida to Martha’s Vineyard in Massachusetts. Guess Pelosi forgot the fact that those migrants were initially from Texas.

Pelosi began her response to a question regarding the subject that was asked during the press conference by acknowledging the necessity of both increased border security and more accessibility for migrants. To paraphrase her words: The reality is that we are accountable for ensuring the safety of our border. Additionally, it is our duty to acknowledge the contributions made by those who have just arrived in our country. For the time being, passing comprehensive immigration reform is the most beneficial action we can do for our economy.

However, she continued by noting that there is a labor shortage in our nation. According to her, you can hear some of the farmers and growers complaining even in the state of Florida about the transportation of immigrants to other parts of the country. She added that they stated: “We need them to pick the crops down here.” Pelosi continued by saying, however, this does not imply that we do not acknowledge our moral responsibilities.

Users on Twitter were quite critical of the House Speaker, accusing her of openly declaring that the country ought to benefit from the low-cost work of illegal immigrants.

A journalist for a conservative publication named Ian Miles Cheong posed the question, “Immigrants, what are they good for?”

According to National Review editor Rich Lowry: A vast and uncontrolled flood of illegal immigration is not a solution to anything; nonetheless, this is how they (the Democratic party) believe.

The Twitter account for the Federation for American Immigration Reform posted the following: Democrats can tick off two items on their agenda thanks to mass immigration: “1. More future voters 2.Cheap foreign labor.”

Author Miranda Devine of the New York Post provided the following explanation, in addition to the fact that she is rude and cannot speak English correctly, it is against the law to hire illegal immigrants. It is also bad for a country not to differentiate between legal immigration and immigration that is unlawful. At least there are fewer than six weeks left for us to suffer through this piece of Pelosi.

Michael Berry, a conservative radio personality and podcaster, thought the admission hilarious and tweeted, “Oh my, this is the best thing ever. Perfect.”

Erin Perrine, an expert in conservative communications, tweeted the Speaker of the House is advocating using illegal immigrants as agricultural labor.

Bernie Moreno, who ran unsuccessfully for the Senate in the United States, tweeted: Democratic elitists believe that Hispanics are only useful for harvesting their crops. In November, legal Hispanics will give a loud response, which will send Nancy and a large number of other extreme Democrats packing.