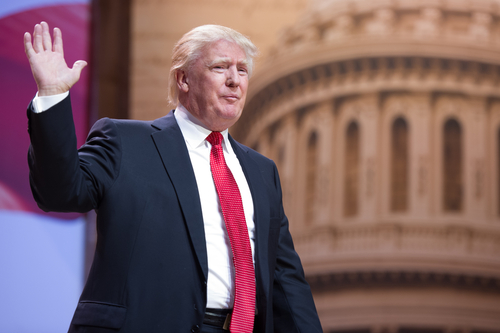 Under Democrats, Trump claims, “once-great cities are drenched in blood.”

Radical Democrats want to convert America into one big sanctuary for dangerous criminal aliens, Trump said at his Save America event in Minden, Nevada, Saturday night. The Republican Party believes our country should be a safe haven for law-abiding Americans who love our country. We must make America safe before we can make it great again, and it’s the only option.

You can’t go down the street in a Democrat-run city without getting shot, mugged, or knifed, Trump added. The streets of our once-great cities are bathed in the blood of innocent victims under Steve Sisolak, your crime-loving governor, and the extreme left Democrats. That’s exactly what’s going on. Trump said.

Trump added a call for the death sentence for drug dealers and human traffickers, a controversial policy he proposed at his last Save America rally address this summer in Nevada.

“In all of these Democrat-run cities “— and he would say almost all of them. Trump added much of the crime wave is driven by drug dealers who, throughout their careers, “will kill an average of 500 American” people. He is advocating for the death sentence for drug dealers and people traffickers, which, in his opinion, will cut drug distribution and crime by more than 75% on the first day.

Trump also blamed drug traffickers for escalating American crime under President Joe Biden’s open-border policies. These cartels make more money than large firms on the New York Stock Exchange, Trump added in a plea for additional police funding. With the Republican Congress, we should also pass essential funds to employ thousands of additional police officers nationally to put and keep dangerous offenders behind bars. We must respect our police officers and allow them to do their jobs.

Trump concluded that it all starts with voting Republican in the November midterm elections. The first step toward restoring public safety is defeating the radical Democrats this November, which begins with a landslide victory over Steve Sisolak.

Here is what else he had to say:

After Ukrainian President Volodymyr Zelensky explicitly ruled out negotiations with Russian President Vladimir Putin in response to his unlawful annexation of four Ukrainian provinces. Trump stated that we must insist that a peaceful conclusion to the fighting in Ukraine be negotiated immediately. Or we’ll wind up in World War III, with nothing left of our world, all because ignorant people did the wrong thing. They don’t get it; they genuinely don’t get it, Trump stated.

The ‘broken’ grid in California

Trump was critical of California, claiming that the state’s electrical grid was “broken.” He told the crowd to examine California’s energy policy. Where everyone must own an electric vehicle, and meanwhile, we currently lack the power to put on an air conditioner in California, Trump stated.

“‘Please do not use your air conditioning,” they urge in a letter. Then they want to dump millions upon millions of automobiles onto a faulty grid.

He referred to California’s sanctuary state policy as “barbaric.” The extreme Democrats want to convert America into one big safe haven for dangerous criminal foreigners, he continued.

Following news that Hunter Biden may be prosecuted with many offenses, Trump surmised that it is all a “charade” to justify pursuing him.

“They’re leaking that a couple of minor charges,” tiny charges relative to the sort of things that they might be, and that’s up to them, but are they going to “do the right thing and hold the Bidens accountable?” Trump stated.

“Or is this just charade, ” a reason to target him, or continue attacking our Make America Great and me Again and America First movements?

Trump stated that he wasn’t sure.

“I think they want to target us, and they make it appear a little bit fairer when they throw out a few of Hunter’s charges,” he claimed.