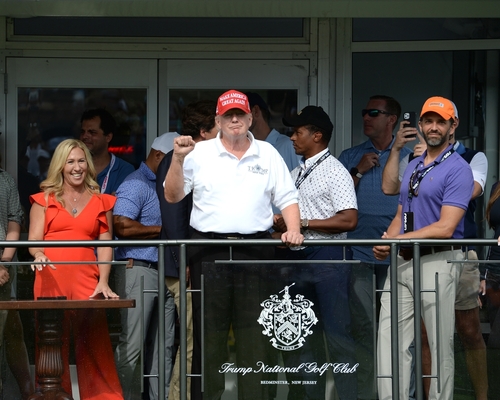 Trump has flirted with the notion of picking Greene to join his ticket. “It’s been addressed frequently.”  Draper noted that Trump is considering Greene because she has been “unwaveringly faithful” to him throughout their relationship. Trump is very concerned about loyalty. He said that after the Mike Pence experience, where he felt Pence lacked loyalty, it became very important.

Trump has publicly stated in the past that he would not choose former Vice President Mike Pence as his running mate again because Pence “committed political death” by refusing to intervene in the election certification process.

Draper stated that the former president needed someone who would battle for him to overturn a presidential election. The reporter said Trump has every reason to assume that Greene will be by his side and serve as his closest fighter.

Greene told Draper earlier this week that she and Trump had discussed the prospect of her acting as his running mate. She stated that she would be “proud” to serve but that the G.O.P. establishment would not support her candidacy.

She thinks the last person the R.N.C. or the national party would want as his running partner is her, she told Draper in a New York Times magazine extract from his forthcoming book.

Greene is one of the most well-known conservative firebrands in U.S. politics, despite being stripped of her committee duties in February 2021.

Two years ago, when Marjorie Taylor Greene won a House seat, the media delighted in criticizing her.

And the Georgia representative provided them plenty of fodder, from her former belief in Qanon to her comments on Jewish space lasers, the “supposed” jet that attacked the Pentagon on 9/11, and Pelosi’s gazpacho police eavesdropping on members of Congress. Even Republican leaders saw her as a source of embarrassment, and the Democrats stripped her of her committee duties.

The media continue to enjoy harassing her. However, Greene has become one of the most prominent Republicans on Capitol Hill.

She has accomplished this through social media and speeches, creating her national brand and becoming one of the most contentious voices in her party. She has pushed the leadership to take her seriously by employing celebrity politics inherent in the Trump age.

Greene has moved from the G.O.P.’s far-right periphery to its establishment center without altering her convictions; if anything, she has found more severe methods to express them.

In fact, Greene said of Kevin McCarthy and the expected Republican takeover, “to be the best House speaker and to please the base;” he’ll give me a lot of authority and a lot of leeways. And if he does not, people will be really disappointed, she claimed. McCarthy, for his part, has engaged Greene in a charm assault. Since the days when Mitch McConnell referred to her beliefs as a “disease” in the party, this has been quite a change.

Trump has not publicly declared that he will run for president again in 2024, but people in his inner circle anticipate that he will do so within the next few weeks.