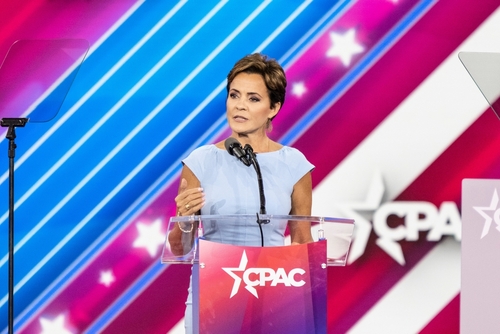 Kari Lake has released a humorous message thanking outgoing Representative Liz Cheney for not endorsing her.

As the eternal narcissist she is, Cheney released a commercial in Arizona on Friday in which she attacked Lake, stating we cannot hand authority over to those who will not respect our elections.

Liz Cheney’s commercial has caused Kari Lake to release a humorous statement thanking outgoing Representative Liz Cheney for not endorsing her. Lake is competing against Democrat Katie Hobbs for governor of Arizona.

According to the advertisement, Liz Cheney tells the audience that she cannot recall having ever voted for a Democrat. She then states that if she lived in Arizona, however, she certainly would vote for a Democrat. She justifies this by saying that you have a candidate for governor, Kari Lake, and a candidate for secretary of state, Mark Finchem, both of whom have stated that they will only “honor election results if they agree with it,”

Being as despised as she is, the advertisement had the opposite impact of what she planned. In a message sent to Twitter, Lake stated that her donations were “skyrocketing” following the commercial’s airing and that visitors nearly overloaded her campaign website.

Her letter, which she posted to her Twitter account, stated that campaign donations were surging. Her website nearly crashed as people hurried to learn about her plan to put “Arizona First” and join the “historical movement.”

On Friday alone, Lake’s campaign raised $300,000, prompting her to declare Cheney her “biggest fundraiser to date.”

Her letter went on to add that according to her team, Cheney’s commercial should “add 10 points to our lead!” Lake wrote that she supposes this is why they call the Cheney anti-endorsement the gift that keeps giving.

Once again, thank you for the “huge boost to our campaign,” Lake said. “Enjoy your forced retirement from politics,” she added, referring to her overwhelming defeat in the primary. She is confident that America will rest easier now that another “warmonger” has been removed from office.

Thanks to this latest commercial, Lake is presently building a commanding lead in the polls against Hobbs.

This is the last twist in an already bizarre race. This past week, the campaign office of Hobbs was broken into, and the event prompted insinuations against her Republican competitor Kari Lake, which the former television news anchor deemed “absurd.”

A few days later, on October 27, police identified the suspect as Daniel Mota Dos Reis, 36, who had been arrested earlier that day for an unrelated commercial burglary and was incarcerated at the time. Dos Reis was identified from security footage from Hobbs’ workplace near Virginia Avenue and Central Avenue, according to a police statement. Dos Reis has been re-arrested and charged with one crime of burglary in the third degree.

The burglary resulted in the theft of an Apple computer mouse, an Apple keyboard, and a black Nikon camera, according to the police report.

Hobbs, the Arizona secretary of state, and Lake have waged an acrimonious campaign for governor. Lake is backed by Donald Trump, and Hobbs is now ironically backed by Liz Cheney, a Republican.

On Wednesday, Lake told CNN that the Hobbs campaign’s remark was “ludicrous.” She asked if you believed that. ” Do you truly believe that? “Because this seems like a part 2 of  Jussie Smollett,” Lake told CNN, referring to the actor convicted of filing a false hate crime claim. Lake stated that Hobbs was attempting to divert attention away from her disastrous campaign and the fact that nobody even knows where her campaign office is. After identifying the culprit, Lake accused Hobbs of spreading the “defamatory” narrative and accused the media of “running with false reports” and “attempting to influence the election.”