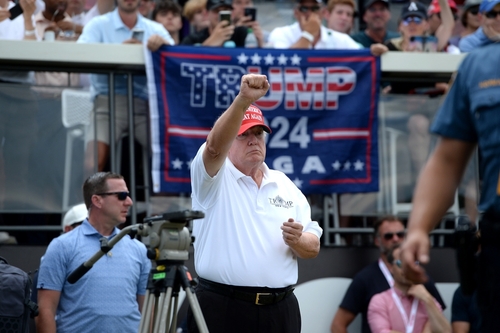 Former President Donald Trump has initiated a counterattack against New York Attorney General Letitia James by filing a harassment case against her. James, a radical Democrat, launched a $250 million fraud case against Trump and several of his family members in September.

The lawsuit initiated by James, alleges that Donald Trump, with the assistance of his children Donald Trump, Jr., Ivanka Trump, and Eric Trump, the Trump Organization, and senior executives falsely inflated Trump’s net worth by billions of dollars to obtain a loan on more favorable terms than it would have otherwise been able to obtain, fulfilling continuing loan covenants, influencing insurers to provide coverage at higher limits and lower premiums, and satisfying continuing loan covenants.

Throughout several posts on his Truth Social site, he clarified his conduct.

He stated New York State is one of the most dangerous locations in the world, with murders, robberies, drug deals, and other crimes setting weekly records. While James does nothing to defend New York from these violent crimes and criminals, she attacks wonderful and honorable businesses that have done nothing wrong. Trump said that she attacks companies like the highly successful, job- and tax-generating Trump Organization he had diligently created over many years.

Trump added that James is Crooked and extremely political and now believes it is the State of New York’s business to go after my revocable trust and snoop into my private estate plan. Trump said she is trying to recklessly harm him, his family, his businesses, and his millions of loyal supporters.

He stated that James was using her case against him for political advantage. Adding that this would not occur if he had not been elected President of the United States and if he wasn’t leading Democrats and Republicans in the polls by huge proportions. We must stand up for our country, combat unlawful persecution, and “Make America Great Again!” he added.

The lawsuit is against James individually and in her capacity as New York’s attorney general. The Complaint states extraordinary transgression merits extraordinary remedy. It accuses James of repeatedly abusing her position to pursue a crusade against President Trump, a Palm Beach County, Florida resident. Her single-minded pursuit’s objective is to destroy him personally, financially, and politically. Adding that, the Attorney General of New York pursued a relentless, pernicious, and unapologetic crusade.

The Complaint describes James as motivated entirely by political hatred and a desire to harass, intimidate, and get revenge against President Trump. She has waged a “war of intimidation and harassment” against the president, his family, commercial interests, and his allies. It states that the attorney general was motivated by personal enmity toward Trump and an obsessive rejection of his eligibility to occupy public office.

The Complaint accuses James of using anti-Trump rhetoric to further her candidacy. Claiming that she began issuing threats against President Trump before she was elected. At a time when she had no genuine knowledge or insight into President Trump’s company. In the running for office, she promised to use whatever resources she had against Trump and “anyone in his orbit.”

During her losing campaign for New York governor, she claimed she had sued him ’76 times.’ Now up for reelection as Attorney General, she is again campaigning on the promise that, if elected again, she will continue her venomous and obsessive pursuit of President Trump, according to the Complaint. These activities are not appropriate for a state attorney general.

The Complaint further states that what began as a cartoonish, thinly-veiled attempt to publicly malign President Trump for personal political gain has evolved into a plot to acquire control of a global private company controlled by a Florida revocable trust headed by President Trump. This refers to the Donald J. Trump Revocable Trust, which the lawsuit requests be protected from James.

According to Axios, Trump lost his final lawsuit against James, which was filed in New York federal court.

A spokesman of James’ office told Axios that the office was not concerned by Trump’s lawsuit. According to a statement released by her office, multiple judges have rejected Donald Trump’s bogus attempts to dodge justice. They will pursue this fraud regardless of the number of lawsuits filed against them.