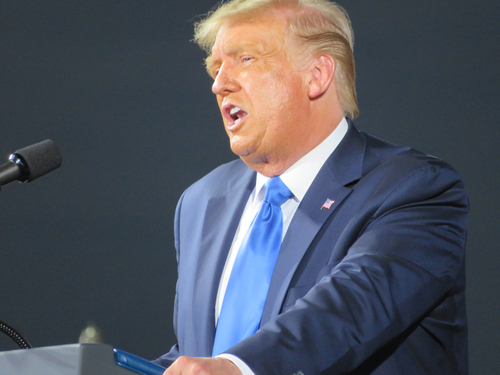 Former President Donald Trump urged his Miami followers to vote for Florida GOP Gov. Ron DeSantis, Marco Rubio, and every other Republican on the ballot in Tuesday’s midterm elections. He also said a message must be sent to the communist left by voting for Republicans.

“This is beautiful — what a place — hello, Miami,” Trump said at a Save America event for Sen. Marco Rubio, R-Fla., which broadcast live on Newsmax. Trump said he could tell you it’s a wonderful honor for Marco. He added that it was wonderful to be back in his home state of Florida. “This is my homestead.”

Trump said that with thousands of patriotic, hardworking American patriots and magnificent individuals, soon the people of Florida will reelect Marco Rubio to the United States Senate, and you will reelect Ron DeSantis as your governor of the state. And you’re going to send Congress an outstanding slate of genuine MAGA soldiers, Trump said proudly.

He clearly stated that he was stumping for Rubio in Miami, making the unusual remark that it was not his rally.

Is there anywhere better to be than at a Marco Rubio rally? Trump stated this instead of his customary “Trump rally” yell. “This is a Marco rally.” We must ensure Marco wins large against a radical-left lunatic – “one of the worst.”

Rubio is up against Rep. Val Demings, D-Fla., in his bid to help Republicans retain the Florida Senate seat and recapture the majority in the midterm elections on Tuesday.

Trump stated that every freedom-loving American must seize that moment to oppose this increasing left-wing dictatorship. You must rise right now. Suppose you wish to protect your rights and liberties. In that case, you must first administer a humiliating rebuke to the radical-left maniacs running in this election, of whom there are many, Trump stated.

Trump, who has hinted that he could launch a presidential campaign in 2024 following the “red wave” of the midterm elections, urged people to prevent America from becoming a “communist” country.

Trump warned that you must smash the communists at the vote box this Tuesday. He then added that he no longer refers to socialists and that we shouldn’t call them socialists. Trump feels that the radical Democrat Party has a communist and Marxist orientation and is one of the primary reasons that millions and millions and millions of Hispanic Americans are joining the Republican Party.

Trump praised the size of the audience in Miami, saying that this could be the best rally we’ve ever had. He credited Rubio with having an energized voter base heading into Tuesday’s final vote, saying, “He gets the job done.”

Trump then said o the audience and Marco that this was a fantastic turnout for him. Trump added that the crowd is amazing, especially because of football and everything else going on. “This is a hell of a turnout.”

Trump said he worked closely with Marco Rubio, who was a tremendous assistant. Trump continued that they overturned the Obama-Biden administration’s awful and extremely weak Cuba policy. It was so pitiful that Republicans canceled their horrible betrayal of the Cuban people. Trump said he vowed not to relax sanctions until all political prisoners were released, freedoms of assembly and expression were respected, all political parties were legalized, and free elections were set. It happened until the stolen election. On the other hand, the Biden administration has entirely abandoned the people of Cuba, Nicaragua, and Venezuela.