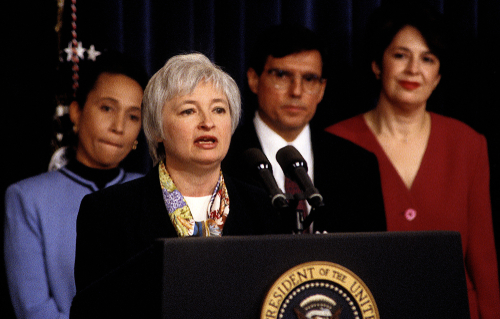 Treasury Secretary Janet L. Yellen urged Congress to raise the nation’s statutory debt limit to a level that would not be reached until after the 2024 election, thereby neutralizing the ability of Republicans to prevent the U.S. from paying its bills to gain Democratic concessions.

If they finally recapture one or both houses of Congress next year, Republicans are anticipated to leverage the nation’s borrowing limit. In prior years, they sought severe expenditure cutbacks in exchange for voting to lift the debt ceiling, resulting in impasses that led to government shutdowns, shook markets, and threatened the nation’s credit rating.

Ms. Yellen stated that she believes the Democrats, who will keep control of the House and Senate until the end of the year, should erase the issue for the remainder of President Biden’s tenure.

Ms. Yellen stated in an interview with The New York Times aboard her aircraft to Bali, Indonesia, for the Group of 20 summits she would love to see it completed. She always worries about the debt ceiling.

Ms. Yellen has previously advocated for eliminating the debt ceiling, but President Biden has appeared to reject this notion. Ms. Yellen deems the minting of a trillion-dollar coin to be a novelty that should not be contemplated in light of last year’s lengthy debate over the debt ceiling.

In December 2017, Congress increased the debt ceiling by $2.5 trillion to around $31.4 trillion. According to the Bipartisan Policy Center, this threshold is estimated to be reached in early 2023. The Treasury Department may likely extend the so-called X-date until the second half of next year by “exceptional” measures.

Republicans, particularly California Representative Kevin McCarthy, have proposed tying hikes in the debt ceiling to a review of current expenditures. And in recent weeks, former President Donald J. Trump has blasted Republicans for not using the debt ceiling more successfully to coerce Democrats into compromises.

Even though the House and Senate control remains uncertain, Republicans have indicated that if they win at least one, social programs like Medicare and Social Security will be reduced.

The secretary of the Treasury has warned that failure to lift or suspend the borrowing limit might result in an economic and financial catastrophe. By raising the debt ceiling, the federal government can borrow more money to meet its financial obligations; raising it does not authorize additional expenditure and enables the United States to fund current liabilities.

Ms. Yellen stated in the interview that she would support a Democratic proposal to prevent the issue from getting politicized.