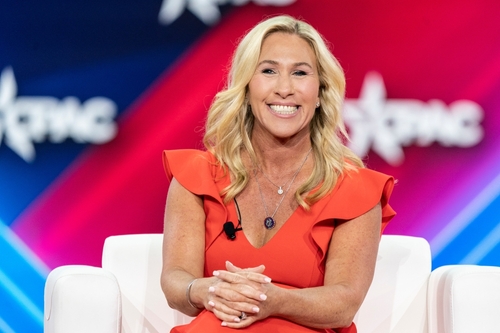 Marjorie Taylor Greene summarizes the 2022 election in three terrifying words in a now-viral tweet that set the internet on fire. This week, Georgia Representative Marjorie Taylor Greene ignited social media with her three-word description of the midterm elections on November 8: “slowly stolen election.”

Greene, one of the most prominent MAGA politicians in Washington, D.C., easily won re-election. Nevertheless, like many Republican voters and leaders, she also seems to have concerns about races that have not yet been decided in the country as vote counting continues and the nation settles into its new identity as the world’s most technologically advanced and democratic nation. It is still unclear what the outcome of a simple election will be a week after ballots are cast.

Greene was exploring the boundaries of Twitter’s new ownership when she asked if we were allowed to say ‘slowly stolen election’ on Twitter now.

Whether or not you agree with Greene, you cannot deny that she is expressing what many Americans think as the nation continues to reel from Tuesday’s election results.

The results of Kari Lake’s gubernatorial race in Arizona have not yet been announced. In her ongoing battle against Democrat and incumbent state Secretary of State Katie Hobbs, Lake has been blasting her ongoing concerns with voter tabulation that, for millions of Americans, sounds all too familiar to the 2020 election fiasco.

A person’s vote is their voice,  Lake said, adding that she considers it a sacred vote. Lake went on to say that the voters are being violated by how Arizona conducts its elections. Lake said she had sounded the alarm for the past two years, and nothing had been achieved. Very little was accomplished during the last legislative session. Trust must restore in our elections; Lake told Maria Bartiromo of Fox News on Sunday.

The furious America First candidate, who has expressed “absolute 100 percent certainty” that she will ultimately win the current election, stated that they could no longer be the punchline of elections in Arizona. And as governor, she will not permit that.

According to Fox News anchor Tucker Carlson, in the now-famous-for-election-problems Maricopa County, Arizona, the election budget is $4.5 billion, which is five times the cost of building the Hoover Dam when adjusted for inflation. Yet, complications began to arise as soon as the polls opened on Tuesday. Over a week after the election, ballots are still being tallied.

Carlson added that one poll worker indicated that 25% of votes were rejected. According to Carson, you would call this third-world, but it is a sub-third-world. The majority of third-world nations have legitimate elections, and they need voter identification. In Ghana, they do not wait days for election results.

Carlson noted that Clarke County, Nevada, and contests in California, Oregon, and Washington, most of which were in “purple” districts where outcomes stay close, had also seen days-long delays in close elections.

Greene’s summary of a “slowly stolen election” generated a flurry of responses that reflected the current discourse and partisan outrage regarding elections.

Aside from the obligatory smear campaigns, there were also more serious conversations and support for the validity of her statements.

Similar problems with vote tabulation in 2020 caused millions of voters to believe that now-President Joe Biden and the Democrats had cheated to win the election. Those problems now appear minor compared to the stunted election results in 2022.

The Republican base strongly backed then-President Donald Trump and the MAGA wing of the party just hours before protesters stormed the Capitol Building. Legal challenges to the 2020 election were led by Senators Ted Cruz of Texas and Josh Hawley of Missouri, among others. These lawmakers and state legislators across the country simply wanted answers regarding issues with vote counting and questionable legal state election law changes in key electoral states, and they had every legal right to do so.

The Republican party got two years of gaslighting and suppression from Democrats and Big Tech instead of accountability and answers. Their narrative is that our elections are safer than ever, so you’re a right-wing terrorist for believing otherwise., unless, of course, the Republicans win the midterms, in which case the GOP is planning an orchestrated election theft, according to Hillary Clinton,  who had the audacity to post that before the elections even occurred. Of course, Hillary also believed the 2016 elections were stolen.

Is it any wonder so many voters no longer believe in our elections or take them seriously? Greene is at least willing to speak out about the quiet part and can do so because of less censorship on Twitter; however, who knows if being uncensored on a Big Tech platform will be sufficient to bring about the real and effective change we so desperately require?