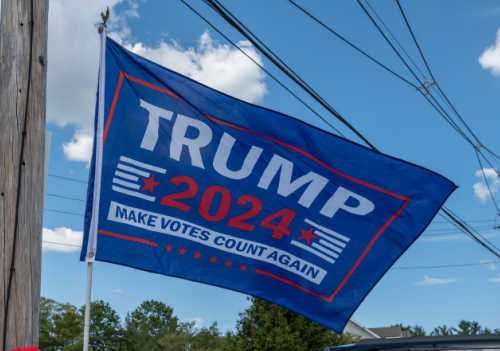 No matter what happens in the 2024 presidential election, House Democrats seem afraid to face former President Donald Trump. They are so afraid that they are reportedly considering legislation prohibiting the former President from running for office again.

At his Mar-a-Lago resort in Palm Beach, Florida, Trump announced Tuesday night that he had submitted his nomination paperwork to the Federal Election Commission. He said America’s comeback starts right now.

Trump addressed his audience by stating that two years ago, the U.S. was a great nation and will soon be again. He made the decision to run for President because he wanted to make America great and glorious again.

If Trump is elected, he will become the second U.S. president to serve two different terms in office, after Democrat Grover Cleveland. Cleveland was elected President in 1884. In 1888, he lost his bid to stay in office, but in 1892, he won again.

It has already been said on both sides of the political aisle that Trump cannot win again. But it is said that some Democrats in the House of Representatives want to ensure that he has no chance of becoming President in 2024 or ever.

On Wednesday, Nicholas Wu, a reporter for Politico, tweeted about a measure to keep the former President from running for office again because he called for an “insurrection” on January 6, 2021. Wu said that the idea came from Democratic Rep. David Cicilline of Rhode Island, who was also in charge of impeachment in the House.

In the tweet, the congressman said he is sending out a letter to Dems to get support for a bill that would make it illegal for Trump to be in office based on the 14th Amendment.

Cicilline’s letter further stated that given the evidence from hearings on January 6, 2021, the impeachment trial, and other various reports Trump engaged in insurrection on January 6,  Trump’s goal was to overturn the legal results of the 2020 election. Cicilline mentioned that he had written legislation to stop Donald Trump from running for public office again under the Fourteenth Amendment.

The bill contains testimony and evidence showing how Donald Trump attempted to take over the government of the U.S., Cicilline wrote.

It shows in detail how Donald Trump took part in insurrection when he helped plan and encouraged the uprising on January 6, even though he knew the election results were legal, Cicilline said.

The letter says that Trump tried to intimidate state and federal officials when they didn’t back his “false claims and illegal plans,” Trump tried to get Mike Pence to not certify the election results, even though Mr. Pence and his legal advisors said he didn’t have that power.

Cicilline also said that Trump supported the violent uprising at the Capitol on January 6, refusing for hours to condemn the mob and putting thousands of lives at risk.

After the Civil War, the 14th Amendment stated that any person engaged in insurrection or rebellion against the government could not serve as a Senator or Representative in Congress or as an elector for the President or Vice President.

Still, not all of what Cicilline says in his letter is true. On January 6, 2021, Trump posted a video asking his supporters to leave. But before the invasion of the Capitol began, he told the crowd at his rally in Washington to make their voices heard today in a peaceful and patriotic way when expressing their worries about the 2020 election. He did not start a fight.

Trump wasn’t the only Republican who doubted the election in 2020, and some Republicans in Congress didn’t like it when Congress said that Democrat Joe Biden won the election. The wall around the Capitol was broken, people got inside, and Trump was not there.

Also, despite what the letter says, the House Select Committee has not yet “found” that Trump “incited insurrection” on January 6. Not only are House Democrats going on the attack against the former President. During Trump’s speech on Tuesday, the White House attacked him by tweeting from Biden’s account that “Donald Trump failed America.”

It’s clear that Democrats are worried about the former President running for President again in 2024 and will attempt to do everything they can to stop him as soon as possible.