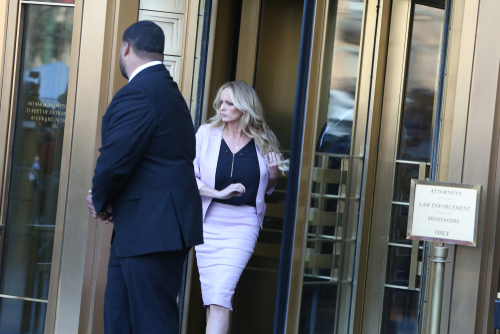 The Manhattan District Attorney’s office is renewing its criminal investigation into Trump’s alleged hush money to adult film actress Stephanie Clifford, more commonly known as Stormy Daniels. Trump has been accused of making “hush money” to Daniels to quiet her over their alleged romance.

Trump has denied any involvement.

Before the 2020 election cycle, House Democrats investigated the “hush money” payments as a strategy to drag down Trump’s 2020 re-election campaign.

The predecessor of Manhattan District Attorney Alvin Bragg dismissed the Trump ‘hush money’ case because it would not hold up in court. A few years later, the Manhattan DA would reopen the Stormy Daniel hush money investigation to fight Trump’s 2024 White House quest.

Recall that Weisselberg recently testified that Trump and his sons were unaware of the tax fraud plan after pleading guilty to tax charges.

Since Weisselberg has not testified against Trump, prosecutors are investigating a fresh wave of insurance fraud charges against him – unconnected to the Stormy Daniels hush money.

Years ago, the district attorney’s office scrutinized the payment to actress Stormy Daniels before shifting focus to Trump’s broader business activities. According to sources familiar with the subject, Bragg and some of his subordinates have lately signaled to acquaintances, supports, and at least one attorney engaged in the case that they are enthusiastic about developing a case against Trump.

Trump is embroiled in a whirlwind of legal and political drama, which has prompted a reexamination of the hush money payments. Friday, U.S. Attorney General Merrick Garland named a special prosecutor who pledged to move swiftly with two federal investigations of the former president. Uncertain is if Bragg or the special counsel would eventually pursue charges against Trump, who has declared his third presidential candidacy. What has become clear is that the Democrats are abusing the Justice system in an effort to prevent Trump from winning the 2024 election.