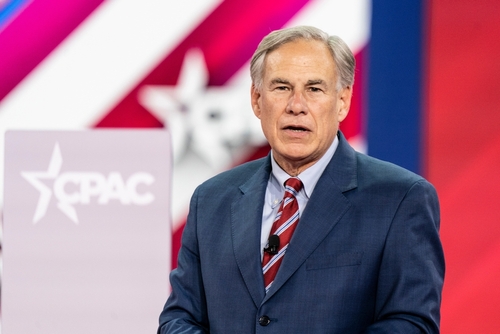 The governor of Texas takes a bold step to protect Texans from dangerous cartels: by sending military-style tanks to the border. Trump-backed Greg Abbott (R-TX) has decided to take a firm position against the illegal border incursion in Texas. Abbott is using the “invasion provisions” of the Texas and United States Constitutions to safeguard the Texas-Mexico border only a few days after his victory against the radical Democrat Robert O’Rourke.

The governor tweeted that he invoked the Invasion Clauses of the United States and Texas Constitutions to fully allow Texas to take extraordinary actions to protect our state against an invasion.

Abbott increased his efforts to safeguard Texans and the rest of the nation by deploying tanks to the border. This move sends a clear message to unlawful border crossers and the Biden administration, which continues to fail to defend American citizens against illegal migrants and drug cartels.

Abbott’s new program of sending tanks to the border is costly. According to reports, each armored tank is worth $300,000. According to The New York Post, several of these M113 tanks are presently being utilized in Ukraine to fight against the Russians.

According to the letter delivered to Texas county courts, the state is spending over $4 billion in public funds to protect the border and stop this invasion. In the same vein, he lauded the previous administration, stating that two years ago, we had the lowest number of illegal border crossings in decades. As of this year, under the leadership of President Biden, a record number of illegal immigrants crossed the border. He clarified that the need for so much money is the lack of Biden’s administration to secure the borders.

In recent weeks, the governor has taken further measures to combat the illegal incursion at the border, in addition to his decision to send tanks to the border. He is also attempting to sign a bill to impose harsher punishments on people illegally smuggling fentanyl into the U.S. via Texas.

This measure has the potential to save many lives, as it will assist in stemming the illicit flow of fentanyl across the border, which is responsible for so many American deaths. Fox News reports that U.S. Border and Customs Protection confiscated 15,000 pounds of fentanyl in the past fiscal year alone.

While this is an enormous step forward for Texas and the rest of the country, it is not the first time in recent years that the governor has taken a firm stand. Before Roe v. Wade was overturned, the governor signed the Heartbeat Law, which made abortion illegal after detecting a heartbeat.

Following the Heartbeat Bill, he introduced another bill known as a “trigger law” that would outlaw all abortions if Roe v. Wade were ever reversed. A year later, with the Supreme Court’s momentous ruling, this legislation prohibited all abortions in Texas.

Governor Abbott is crafting laws to protect the innocent on purpose. By prohibiting abortion, several unborn children’s lives are spared, and by controlling the border, the governor assures that fewer illicit narcotics enter American cities.