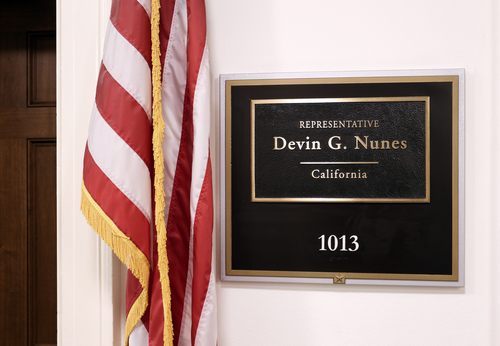 Trump ally granted permission to sue NBCUniversal; claims Maddow should have checked her facts. A court has cleared the door for former Republican congressman and close Trump friend Devin Nunes to sue NBCUniversal for misleading statements by show host Rachel Maddow on his alleged ties to Russian spies.

According to the ruling, the incident dates back to 2021, according to the cable personality who claimed Nunes refused to hand over a package to the FBI he had received from Andriy Derkach, “a Ukrainian legislator with ties to Russian officials and intelligence,” in 2020 when Nunes was still the ranking member of the Senate Intelligence Committee.

In other news, by 2021, it appeared that Rachel Maddow had yet to come up with a catchphrase other than “muh Trump Russia” to liven up her shows.

According to Reuters, U.S. District Judge Kevin Castel in Manhattan ruled on Monday that Nunes “plausibly allege[d] actual malice” against NBCUniversal, the parent company of MSNBC.

Maddow is not listed as a defendant in action, but her allegations that Nunes “refused to give over” the Derkach package “to the FBI” might place NBCUniversal in deep water if the Trump loyalist prevails in court.

Congressman Nunes has declined to address questions on the information he got from Andriy Derkach. He has refused to reveal the package’s contents to other intelligence community members. He has refused to turn it over to the FBI, which is what you should do if you get material from a Russian agent sanctioned by the United States, she remarked in March 2021, as recounted in the lawsuit.

According to Reuters, Nunes and his attorneys accuse MSNBC and Maddow of knowing that he had not done such a thing and of having set out to inflict maximum agony and suffering on Plaintiff to damage Plaintiff’s image.

A fair observer may perceive the speaker to have said that Nunes ‘refused’ to hand over the Derkach package to the FBI. In his 22-page order, Castel agreed that a reasonable viewer might conclude that such behavior is much more severe than what was alleged in the Committee process, allowing Nunes’ case to proceed.

The judge also confirmed that the item in question was exclusively handled by Nunes’ staff and sent unopened to FBI headquarters. In a letter dated the same day, Nunes notified Attorney General William P. Barr of the package’s receipt.

During his time in Congress, The Republican legislator first raised what would turn out to be legitimate concerns about the origins of the infamous dossier that would serve as the basis for Robert Mueller’s special counsel investigation during the early days of the Trump-Russia scandal when he was one of the first Republican lawmakers to voice what would turn out to be a key Trump ally.

Like so many other figures that were an easy target for the rabidly anti-conservative establishment media complex, it is easy to believe that Devin Nunes was the victim of malicious defamation intended to harm his reputation, an attack based solely on the fact that Rachel Maddow could strike yet another blow against the Big Bad Orange Man — Donald Trump.

Who can forget when The Washington Post pounced on the story of a bunch of youngsters wearing MAGA hats insulting a Native American activist, completely ignoring that the journalistic integrity implied by its tagline will keep democracy alive to smear Trump supporters?

Regarding this heinous example of media malpractice, the victim Nicholas Sandmann was awarded $250 million, but not before the image of his face was permanently etched in the memories of millions of Americans as the young guy who mocked an innocent elderly man.

The media treated Kyle Rittenhouse badly, and he will also be in court. Still, he remains firmly established to those who defer to the authority of supposedly nonpartisan legacy media outlets, which operate with a distinct, intentional bias just as a racist white nationalist brutally murdered innocent Black Lives Matter protesters.

Then-presidential candidate Joe Biden used an image of Rittenhouse in a montage of examples of the imminent threat presented by white nationalists. The media, of course, barely uttered a peep as they would have if the Trump campaign had committed the same offense.

Biden, and the media outlets that so regularly function as his party’s PR wing, are not above the law, and Rittenhouse may also sue him.

Even while the harm has already been done, these media outlets should still be held accountable for their blatant lack of journalistic ethics.

They have gotten away with everything for far too long.