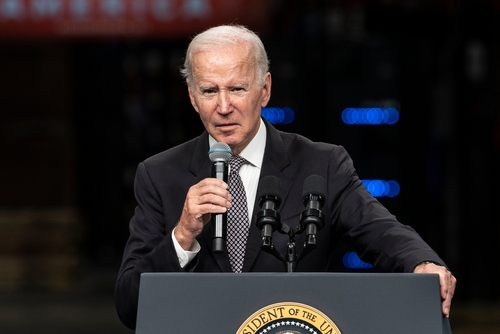 Tara Reade, a former Biden worker who had worked for him as a Senate assistant in 1993, accused then-candidate Joe Biden of sexual assault before the 2020 presidential election. The legacy media swiftly and effectively quelled these charges.

Reade revealed to the Daily Caller last week that she had urged House Republicans to investigate the event when they regain the majority in January. She told the site it would be a totally different situation if “I could testify under oath.”

She emphasized that she would give any information Congress needed, and Congress may ask her whatever questions they wanted. She stated she believes we need to have the dialogue, rather than herself and other women who attempted to come forward being erased.

According to Reade, then-Senator Biden held her against a wall in a Senate hallway, grabbed beneath her clothing, and sexually assaulted her.

Reade told the Daily Caller that she filed a sexual harassment claim with the Senate after the event.

There might very well be a record of Reade’s complaint in Biden’s Senate records. The records are at Biden’s alma mater, the University of Delaware, which has sealed its records. Additionally, Biden’s team has moved heaven and earth to conceal any complaints.

The institution told The Washington Post that the documents will stay sealed “for two years following Biden’s retirement from public service.” Before Biden’s campaign started, the institution stated that the records would not be made public until after he had left “public life.”

Reade stated that her complaint regarding the alleged event was not properly accepted by her supervisors. Reade said she was intimidated and ultimately fired. According to the Daily Caller, one staff member informed her, “We’ll f***ing ruin you if you go forward.”

Reade remarked to the Daily Caller, “I was 28 years old.” Hearing this was terrifying at the moment, and it occurred at the outset of Reade’s political career. Reade said it effectively silenced her.

The New York Times reported that Reade spoke with Marianne Baker, Biden’s executive assistant, and Ted Kauffman and Dennis Toner, two of Biden’s senior staff members at the time. According to the Times, everyone disputed that Reade complained.

In April 2020, The Intercept interviewed Baker. She told the publication, In all her years working for Senator Biden, she has never once observed, heard, or received any allegations of inappropriate behavior, period — not from Ms. Reade, not from anybody. These demonstrably untrue charges go counter to the inner workings of our Senate office and the guy she has known and worked closely with for almost two decades.

Reade pondered if their memories would be more accurate if they were questioned “under oath,” stating to the Daily Caller Reade believes they would have to acknowledge something quite different.

The Times stated that Reade’s event description lacked specifics regarding “the precise time, date, and place.” However, the Times piece did recognize that Reade notified one of her friends about the incident immediately after it allegedly occurred.

In addition to Reade’s brother, a second acquaintance stated that she had informed them over the years of a terrible sexual experience with Mr. Biden, as stated by the Times.

Perhaps the explosive audio recording of the woman, whom Reade alleges was her deceased mother, lends the most validity to her claims.

In the audio clip below, a caller asks King, aside from speaking to the press in Washington, what would a staffer do? She said her daughter had recently left after working for a renowned senator. She could not resolve her issues, and the only option was to go to press, but she opted not to out of respect for him.

King said, in other words, she had a tale to share, but out of respect for her employer, she did not.

The Daily Caller noted that the most Biden supporters could do to damage Reade was explore if she had falsely misrepresented her school credentials under oath. According to a June 2020 article in The New York Times, a spokesman for Antioch University, where Reade claimed to have obtained an undergraduate degree, verified that Reade had taken classes there but had not acquired enough credits to graduate.

The Intercept conducted an extensive investigation into Reade’s academic background in March 2021, finding that, although being a jumble, Reade’s narrative of her graduation from Antioch is consistent with the data in her file.

Reade told the newspaper there were no Russians present when Joe Biden sexually raped her in 1993. When the Biden team intimidated her and used their authority and resources to attempt to silence her, no Russians were there. Reade said her political ideas about Russia are irrelevant in light of recent events.

She said she was proud of her few published opinion pieces. She added that she attempted to publish one in the New York Times, but her submission was denied. Reade said that in 1993, she was Joe Biden’s full-time employee when he attacked and sexually harassed her. Why Biden has never even been investigated for the crime he committed in 1993 is irrelevant to any discussion of her current beliefs or those with whom she works.

Whether the Republican-controlled House launches an investigation into Reade’s charges, her return to prominence can only be bad news for Joe Biden.

Reade is about to contribute to making the final two years of Biden’s four-year term a living nightmare for him; the Republicans are sure to investigate the endless unsavory aspects of the Biden presidency and family. The President has a long history of complaints about inappropriate behavior from women who have come into close contact with him.

Democrats must be aware of what awaits them. In addition, they must prepare for the assault they will face in January.