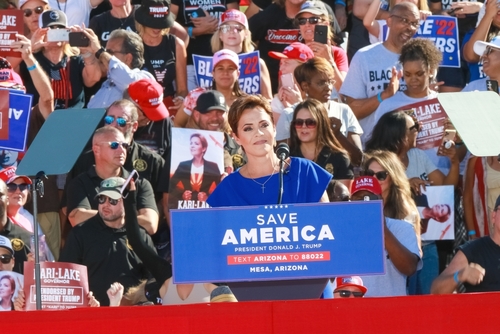 According to an internal email, a major problem was identified in Maricopa County: “There’s a 15,000 Difference Somewhere.”  The emails highlight that Maricopa County, Arizona’s election day was a nightmare. Given the high-stakes implications of the election’s outcome, it is logical and understandable that voters and candidates would be dissatisfied with the day’s events.

In legal terms, Republican Kari Lake is locked and loaded. Through the courts, she is attempting to bring transparency to the situation, particularly regarding what occurred with multiple ballot machines and other unfortunate circumstances, which she claims disenfranchised voters on November 8. According to JustTheNews, while the election has been officially certified by the state, a new development involving the number of ballots included in the discrepancy is already raising eyebrows, as it is close to the total number of votes by which Lake lost to her opponent, Secretary of State Katie Hobbs.

Election authorities in Maricopa County had difficulty reconciling a recently found disparity involving around 16,000 outstanding ballots. Given that only 17,000 votes won the contest between Lake and Hobbs, one can anticipate the issues raised.

In an email dated November 10, Arizona Recorder Stephen Richer informed other senior election authorities, among them Board of Supervisors Chair Bill Gates and Elections Director Scott Jarrett, of the disparity in total ballots.

America First Legal Foundation received the email by submitting a public records request. The gap between the county’s predicted remaining ballot totals and the amount recorded by the Arizona Secretary of State’s office was precisely 16,000 ballots.

Currently unable to reconcile SOS listing with yesterday’s projections, stated Richer. He pointed out the numerical disparity. At the time, Maricopa County had 392,000 ballots waiting to be tallied, but the Arizona Secretary of State said there were still 407,664 ballots outstanding.

Therefore, a “discrepancy of 15,000 someplace,” Richer wrote in an email.

Numerous individuals who question the legitimacy of Maricopa County’s midterm election results in 2022 will view this figure as adding another degree of doubt. It is, at the absolute least, puzzling.

Unsurprisingly, Twitter users, particularly Lake’s fans, reacted negatively to disclosing the lingering ballot difference. The county of Maricopa is stonewalling, and they would not hand over the routers, chain of custody, or ballot images where inconsistencies were discovered. What are they attempting to hide? Tweeted one influential conservative.

It should be emphasized that the disparity does not indicate that Lake would have won the election, and its true meaning is still being determined.

At this point, the election result would not change if all of the outstanding ballots were for Lake, which is statistically unlikely.

Nonetheless, this circumstance highlights the apparent necessity for governments to continue modernizing and strengthening their electoral systems.

Today, when technology is advancing at an exponential rate, there is just no justification for why some states and counties have so many absurd problems with election results, especially in elections that significantly impact the nation.

Even though Lake’s team didn’t win the legal victory they hoped for; the decision contrasts starkly with a similar lawsuit filed in Arizona.