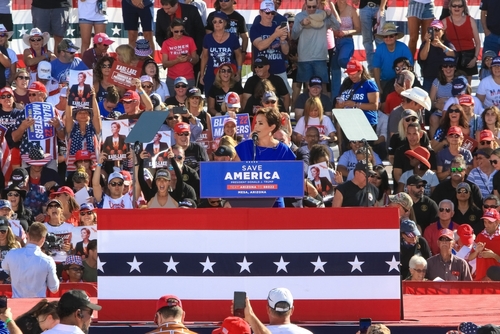 Wednesday was the trial’s opening day in the election challenge of Arizona gubernatorial candidate Kari Lake. Her attorneys focused on the Maricopa County election technology problems that caused disarray on Election Day and disenfranchised voters.

Before this, Superior Court Judge Peter Thompson rejected eight of Lake’s ten allegations in her complaint. Ultimately, his ruling enabled Lake’s complaint to proceed. Thompson stated that Lake’s legal team must demonstrate that that misconduct happened and resulted in “identifiable lost votes,” altering the election’s outcome.

48 out of 113 ballots (42.5 percent) were determined to be “19-inch ballots produced on 20-inch paper,” forcing them to be disqualified, according to a startling discovery made by Lake’s attorneys.

Clay Parikh, a witness for the Lake campaign who inspected the damaged ballots, stated that someone must have altered the printer setups.

According to Parikh, these are not bumps against the printer that alter the settings. He went on to say that Security setups exist. According to his analysis of the facts, the printers are configured by script. Parikh state that this is the norm for large organizations with various platforms. The reason it is done that way is to eliminate the possibility of someone mistyping printer instructions, Parikh stated. Parikh said “no” when asked if the incident might have occurred by chance.

On Election Day, this one-inch disparity produced havoc. Causing the wholesale rejection of these ballots when they were read through the tabulators, Kari Lake’s campaign tweeted on Wednesday.

In a subsequent tweet, Kari Lake’s War Room referred to the difference as “deliberate sabotage.” The devices ought to have been programmed for nineteen. According to Maricopa County’s own evidence, there is “no such thing as a 20-inch ballot,” stated Lake’s campaign staff. However, at 61% of their voting places, machines still produced 19-inch ballots on 20-inch paper. Lake Campaign’s Twitter account said this was the “deliberate sabotage” of Republican voter turnout.

Wednesday night, Lake herself stated that “mutant ballots” were used to wreck the election.

On Election Day, they printed Mutant Ballots utilizing a 19-inch picture on a 20-inch ballot paper, she tweeted. Because the tabulators rejected the votes, mayhem erupted as Lake supporters swarmed the Voting Center to cast their ballots. Lake said that “our elections” are managed by “Clowns and Crooks.”

Mark Sonnenklar, a roving attorney who testified on behalf of Lake, disputed with Maricopa County’s assessments that problems in 60 percent of election-day polling stations were “minor.” It was utter chaos out there, everywhere, Sonnenklar testified.

When questioned if he had “personal knowledge” that the printing problems may have altered the election results, Sonnenklar replied: Had there not been tabulator problems at 132 voting centers, Kari Lake would have won this election.

Heather Honey, an elections inspector, said that Maricopa County and its contractor Runbeck Election Services violated legal standards for the chain of custody. Honey cited claims from multiple persons, including a Runbeck employee who said that county election officials failed to include a critical chain of custody document while distributing votes from ballot drop boxes on election night. The woman (Runbeck’s employee) expressed concern that the well-established procedure had not been used for the large number of dropbox ballots received on election day, Honey said.

On election night, as votes were being retrieved from dropboxes, the investigator met with a second lady who served as an election observer. “Her concern,” Honey continued, was that the shipment containers’ seals were being broken, and the ballots inside were not counted. According to her understanding, this was a necessity, and her biggest worry was that they were removing the votes from the cargo containers without counting them.

In addition, Honey stated that the chain of custody criteria had not been followed. Although the containers were sealed when they were delivered, the problem was that they broke them open, removed the ballots from them, and placed them on trays without keeping track of the quantity; there was no paperwork. She stated that the county’s difficulties with the chain of custody made it impossible to establish how many ballots were wrongly tallied.