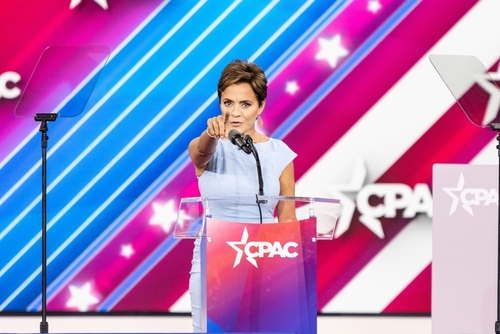 A court in Arizona decided against Republican Kari Lake’s legal challenge to the outcome of the November governor election, in which Democrat Katie Hobbs was proclaimed the winner by around 0.5 percentage points.

Judge Peter Thompson of the Maricopa County Superior Court, chosen by then-Republican Governor Jan Brewer, ruled on Saturday that the Court did not find substantial and compelling evidence of the widespread misconduct that Lake claimed altered the outcome of the general election in 2022.

The Judge dismissed Lake’s contention that issues with ballot printers at several polling locations on Election Day were the product of deliberate wrongdoing.

The Judge stated that Lake’s witnesses lacked direct knowledge of purposeful misbehavior. Thompson stated the Court could not accept guesswork or assumption instead of clear and persuasive proof.

In the judgment, the Court acknowledged the “anger and annoyance” of the inconvenienced voters during the election. Still, it stated that it “had never been done” in the history of the United States to set aside election results.

Fourteen votes had 19-inch (48-centimeter) pictures of the ballot printed on 20-inch paper, suggesting that a tabulator could not read the ballots. The witness stated that someone altered the printer setups, an allegation that election authorities refute.

According to county officials, a IT staffer searching for answers to Election Day concerns picked the shrink-to-fit option on a printer. As a consequence, the ballot pictures were slightly reduced in size. According to them, around 1,200 votes were copied so a tabulator could read them when the option was activated. Officials said that these ballots were ultimately counted.

A person who conducts public opinion surveys testified on behalf of Lake, stating that technical issues at polling stations alienated enough votes to have swung the election in Lake’s favor. However, an expert asked to testify by election officials stated that there was no evidence to support the pollster’s allegation that 25,000 to 40,000 eligible voters did not cast votes due to Election Day issues.

Lake’s attorneys also asserted that the chain of custody for votes was broken at an off-site location where a contractor scans postal ballots before processing. They believe that staff at the plant placed their ballots in a pile rather than transferring them through usual channels and that there was no documentation of the ballot transfer. The county contests the assertion.

Thompson had already rejected eight of the ten claims presented by Lake in her complaint. Lake said that Hobbs, in her capacity as secretary of state, and Maricopa County Recorder Stephen Richer participated in censorship by reporting social media posts containing election disinformation for possible removal by Twitter. In addition, he refuted her charges of discrimination against Republicans and the illegality of mail-in voting processes.

Following the verdict, Lake tweeted that she would file an appeal.

Lake tweeted, “My Election Case supplied the world” with proof that our elections are conducted illegally. She went on to add that the Judge ruled against the voter’s interests. Lake stated that to restore credibility and honesty in our elections, she would appeal his decision.

Lake faced daunting odds in her appeal, as she was required to demonstrate not only that misconduct happened but also that it was meant to deny her victory and did result in the incorrect lady being named the winner.

Hobbs begins his term as governor on January 2. In the Arizona attorney general contest between Republican Abraham Hamadeh and Democrat Kris Mayes, an earlier court on Friday denied Hamadeh’s protest of the results. The Court determined that Hamadeh, who ended 511 votes behind Mayes and has not surrendered the contest, failed to substantiate the claimed flaws in vote counting.