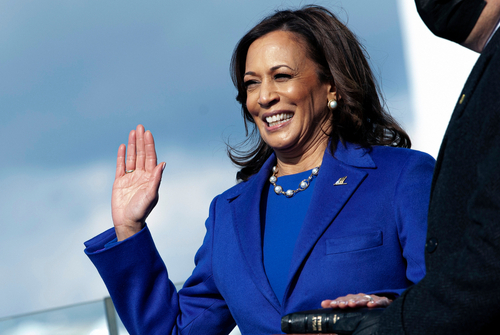 On Saturday evening, three busloads of migrants arrived at the Naval Observatory, where Vice President Harris resides. According to the organization, Migrant Solidarity Mutual Aid Network, a local grassroots group, met the migrants, who were improperly equipped for the frigid temperatures.

Approximately 110 to 130 asylum-seeking migrants, most of whom were families with children, were placed on buses by Texas officials, says Tatiana Laborde, a manager at SAMU First Response, a Washington D.C.-based relief agency.

She stated over the phone that relief organizations had been aware of their travel and were awaiting their late Saturday arrival to distribute blankets and transfer them to a church in the Capitol Hill section of the city.

The aides of Governor Greg Abbott of Texas were unavailable to comment on whether the state coordinated their transportation.

After Biden, the administration moved to repeal a pandemic-era policy that allowed the U.S. to restrict entrance to immigrants, and several other Republican governors have transported migrants to Democratic-controlled communities in the northern United States. The Republican governor from Texas has been an outspoken opponent of the Biden administration’s immigration policy.

Many critics have called Texas’ busing of thousands of migrants to Washington, New York City, and Chicago a political stunt amid a national discussion over the increasing volumes of immigration arrivals along the United States’ southern border.

Laborde stated that nine busloads of migrants were sent to Washington the preceding week.

Greg Abbott, the governor of Texas, stated that his state intentionally transports migrants to sanctuary communities, where law enforcement is prohibited from deporting immigrants.

“Recently, we’ve seen a rise of individuals from Ecuador and Colombia,” Laborde added. She stated that several Venezuelans had already arrived by bus.

According to Laborde, many of the most recent immigrants to Washington, DC, seek to travel to New York or New Jersey, where they have family or other community support. She stated that everyone who arrived here yesterday night could receive free transportation on a charter bus, bringing them closer to their ultimate objective.

According to the Texas Governor’s office, more than 8,700 migrants have been transported by bus from the Texas border to Washington, D.C., and another 6,520 have been brought to New York, Chicago, and Philadelphia.

Abbott responded in a letter to the president dated December 20: This horrible predicament for border communities in Texas is a tragedy you created. These localities and the state lack the resources to fulfill the federal government’s mandate to accommodate the daily influx of thousands of refugees. Many refugees are at risk of freezing to death on city streets as dangerous temperatures approach the region.

More than $12 million has been spent sending migrants to East Coast cities, according to the Texas Division of Emergency Management. Abbott’s multibillion-dollar efforts to curb border crossings started in April. Abbott began sending migrants to Washington who volunteered to accept the rides as a way to antagonize President Biden.