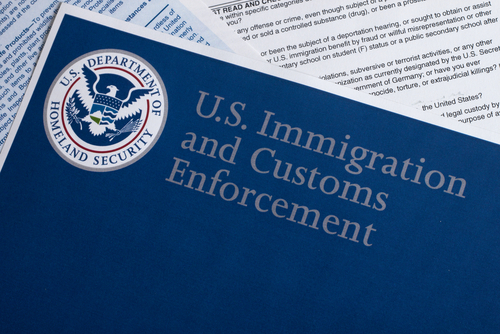 Hundreds of thousands of illegal immigrants allowed into the United States by U.S. Immigration and Customs Enforcement (ICE) have “no records.”

The Department of Homeland Security agency disclosed the information in response to a (FOIA)  Freedom of Information Act request from the Transactional Records Access Clearinghouse at Syracuse University (TRAC). According to the Daily Caller News Foundation, TRAC had sought information on 377,980 illegal aliens in ICE’s Alternatives to Detention (ATD) program.

The government responded to TRAC’s Freedom of Information Act request, ICE searched the Enforcement and Removal Operations (ERO) for information responsive to your request, and no responsive records were identified.

The ICE ATD program aims to guarantee that migrants comply with court orders while avoiding physical detention. Through GPS tracking, ankle monitors or cell phones, and obligatory check-ins with case agents, the agency monitors migrants. The initiative was initiated in 2004 to free up space in immigration detention cells as migrants await the resolution of their cases in overcrowded immigration courts.

ICE’s statement that it could no longer locate records on immigrants in ATD that it had previously disclosed came as a surprise, especially considering it just admitted that it had misled the public for several months by distributing severely erroneous ATD data. The agency has to come clean immediately. The American people deserve accurate information regarding the ATD program, according to TRAC assistant professor Austin Kocher’s statement to the DCNF.

On Tuesday, Kocher said on social media, just days after revealing that the agency had misled the public for months regarding the number of immigrants wearing GPS ankle monitors, @icegov claims it cannot locate records on more than 350,000 immigrants in the alternatives to detention program.

Earlier this month, ICE issued an apology when it found that it had been underreported by more than 18,000% of illegal immigrants released into the public without electronic monitoring devices, such as ankle bracelets.

Upon further comparison of the information supplied to participants and what was publicly accessible online, it became evident that a data computation error had occurred. Teams worked expeditiously to address and resolve the issue, which has now been updated on ICE.gov. “We apologize that ICE provided erroneous ATD enrollment data and are working to rectify the error in the future,” an ICE representative told the DCNF.

At the southern border, illegal immigration into the U.S. continues to increase. Last week, the Department of Homeland Security revealed data indicating that November established a record for the largest number of migrants encountered at the border. Approximately 60,000 more migrants were caught by authorities in November 2022 than in November 2021, as shown by the figures.