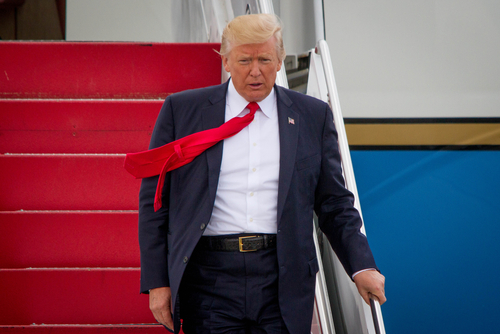 The Democrat-controlled House Ways & Means Committee has released the details of six years of former President Trump’s tax returns. The 46 records (comprising hundreds of pages) showed negative income claims by Mr. Trump and his wife, Melania Trump, in four of the six years from 2015 to 2020, as The Wall Street Journal reported. Each year, the Trumps paid some type of federal taxes, although, in three of the last six years, their income tax due was $750 or less.

The couple’s adjusted gross income was minus $53.2 million during that period. Trump’s total federal tax burden from 2015 through 2020 was $4.4 million, according to the committee report.

The records also revealed that Trump’s businesses lost tens of millions of dollars during his campaign and presidency. Trump paid extremely little in federal income taxes in numerous years between 2015 and 2020, including a year in which he paid nothing.

Here is how The Hill covered this story:

Despite experts’ expectations that there won’t be any major surprises from the raw returns for 2015 to 2020, the more thorough records may give new information on the former president’s companies and professional organizations.

Frank Snepp, a former CIA officer and writer, told the Hill that those who are interested in his link with Russia would be searching for any evidence of what Don Trump Jr. indicated in 2008, that Trump interests had received a substantial amount of money from Russian sources. There must be something here if we keep investigating and collaborating with Russia.

Unfortunately, given the total absence of leaks of anything substantial, there is a strong suspicion that there is no ‘there.’

The public release of these confidential records was never for a legislative purpose, and it was reported that the IRS was conducting audits before Democrats’ requests, according to a statement released by Republican Ways and Means Committee Chairman Kevin Brady (R-Texas) on Friday.

Brady said that despite these realities, Democrats have proceeded with an unprecedented move to unleash a dangerous new political weapon that extends far beyond the former president, breaking decades of privacy protections for the average American since Watergate.

According to a Bloomberg:

Democrats may come to regret the decision since Republicans who will take over the House Ways and Means Committee in January would be pressured to retaliate by disclosing the tax records of Democrats and their friends.

Former President Trump reacts to the publication of his tax returns:

Trump cautioned that House Democrats “should have never” released the tax information, which is among the most confidential records in the country, and that the U.S. Supreme Court should never have allowed it to be released.

Trump stated that it would lead to terrible consequences for many people. The vast division in the United States will now grow substantially wider. The far-left, radical Democrats, have weaponized everything, but remember that this is a “two-way street!”

The crucial question is whether the GOP would use the suddenly “weaponized” IRS against President Biden… or his son.