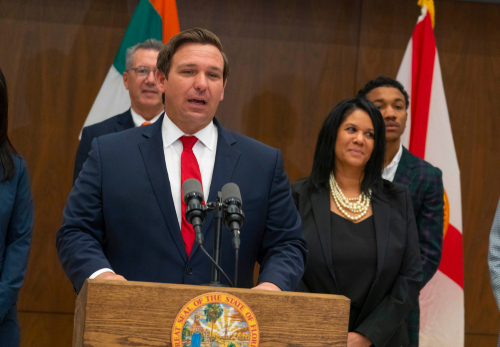 “Decline is a Choice,”  Ron DeSantis said in his fiery inaugural address as he attacked the Biden administration. The Republican governor of Florida has once again set the bar high. In his 26-minute inaugural address on Tuesday, he displayed what a state can achieve in the face of a lawless, out-of-control federal government.

The 44-year-old Republican, who has opposed federal choices on immigration and COVID and taken on woke business and educational policies, began his second term by contrasting Florida’s achievements with those of Democratic states and cities and the Biden administration.

A historic number of families have relocated to Florida from all around the country because they recognize it as the land of liberty and the land of sanity, DeSantis stated. According to DeSantis, Florida is the fastest-growing state because residents are leaving left liberal states and moving to Florida.

He called the United States “a laboratory of democracy” for its fifty separate states’ freedom to pursue their agendas. DeSantis claims that the past several years have been a “great test of governing philosophies,” with many jurisdictions having taken a substantially different road than the state of Florida. Many hardworking Americans have left these states because of their adopted policies, with Florida being the most sought-after destination since it is seen as a haven of rationality.

DeSantis further stated that many municipalities and states have adopted “faddish ideology” at the price of fundamental norms, citing, for example, the undermining of police and the imposition of high tax burdens to pay incomprehensible levels of public spending. He went on to say that the liberal democrats were destroying the school system by putting partisan interests ahead of those of kids and their families.

“They have imposed medical authoritarianism in the guise of pandemic mandates and restrictions that lack a scientific basis,” DeSantis said. This bizarre but prevalent ideology represents justice for the marginalized but frowns upon American institutions.

According to DeSantis, it rejects merit and success and embraces identity essentialism. Florida rejects this woke ideology, DeSantis said.

In addition, Desantis state that people are looking for sanity, not intellectual craziness. Facts, evidence, and the truth are not up for debate; they should not let them become a matter of personal preference. DeSantis said that Florida would never surrender to the woke mob.

DeSantis’s declaration that “Florida is where woke goes to die!” was welcomed with a standing ovation. In his fiery address, the governor laid on the Biden administration, saying they were hindering Florida’s progress.

He blasted the government for spending too much money, causing inflation, imposing unnecessary restrictions on the public due to an ideological fear of pandemics, stifling business activity, allowing drugs and criminals to enter the country through open borders, and enacting an energy policy that jeopardizes national security. The governor said the Biden administration has foolishly “facilitated open borders.”

DeSantis said the federal government is run by a faceless bureaucracy “that does not act on behalf of us”  but rather hovers over and imposes its will. The results were predictable: dismal.

DeSantis expressed that many people feel rather down about the country’s future. Many even predict that the country will fail.

DeSantis said that “we, the people,” are not doomed to failure, and Florida has demonstrated that the people are not destined for failure. “Decline is a choice,” adding that success is attainable and freedom is worth fighting for.

The Washington establishment, the jet-setters at Davos, and businesses with political clout all add complexity to this conflict. However, conflict cannot be avoided. DeSantis called on the nation to embrace the founding fathers’ ideology and hold fast to the basic belief that individual liberties originate not with the goodwill of governments but from God alone.

He continued that self-government should not be delegated to technocratic elites who view people as just data points. It is essential to preserve a government of, by, and for the people at all costs, and traditional constitutional values must be reinstated.

As DeSantis presented his challenges and outlined recent successes of his administration, he spoke in direct, simple, inspiring language as he outlined how Florida has stood up to fads and ideologies, unlike many other states. Furthermore, the governor has pledged to maintain this trend in the years to come. Everything here assumes that he continues to serve as governor and does not choose the alternative that has been speculated.