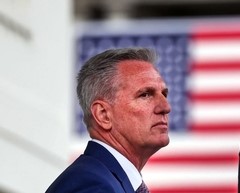 Round 15 was sure to be it, with congress chanting one more round. It was the Democrats that were pushing the 15th round. Perhaps sensing an end in sight when Matt Gaetz (R-FL) and Lauren Boebert (R-CO) voted present in the 14 round.

The House had passed another milestone on Thursday when the voting rounds went to double digits. McCarthy had sought the speakership but failed 14 times in a row to gain the necessary 218 votes. The last time this many rounds occurred was in 1859, and it took 44 rounds of voting.

On the 15th round of voting, McCarthy received 216 votes, with six members voting present, allowing him to clinch the position he so desired.

McCarthy’s journey to the House speaker was hindered by the narrow majority of Republicans and the “Never Kevins.”

Who are the Never Kevins?

Their unrelenting nature and anti-establishment inclinations unite the anti-McCarthy brigade. The group is the GOP’s most conservative bloc, the House Freedom Caucus, representing 19 of the 20 holdouts.

The Republican dissenters demonstrate that the traditional ways of party leaders no longer work.

Rep. Matt Gaetz of Florida remained confident that House Democrats would not support a moderate Republican as a speaker, and if they did, he would retire.

Gaetz made the comment on Thursday when chatting with Fox News anchor Laura Ingraham. Gaetz was questioned about the potential of Democratic legislators defecting. On her broadcast early Thursday evening, Ingraham had speculated that the Democratic Party might assist in electing Rep. McCarthy or another Republican so that both parties have power on the committees.

Gaetz disapproved of Ingraham’s theory and stated that he had been on the floor. This group of 212 Democrats will always vote for Hakeem Jeffries, Gaetz told Ingraham. Jeffries is an unprecedented candidate for them, and they will not waiver under any circumstances.

Gaetz added that if Democrats unite to elect a moderate Republican, he will quit the House of Representatives. He had guaranteed it would not happen and was willing to put his job on the line.

Hakeem Jeffries was elected by his party as House speaker; Jeffries is the first African-American to lead a legislative party following his inauguration as House Democratic Leader. Jeffries received all 212 of his party’s votes in 14 of the 15 rounds for Speaker (the exception was the 12 voting round, where he received 211).

In addition to taunting McCarthy, the Florida lawmaker has mocked him for his repeated failures. Tuesday, Gaetz addressed a letter to the Architect of the Capitol, J. Brett Blanton, requesting an explanation as to why McCarthy was permitted to work from the Speaker’s suite despite not yet being hired. He questioned what basis in law, House rule, or precedent justifies allowing a candidate who has finished second in three consecutive speaker elections to occupy the Speaker of the House Office.

Tuesday, Gaetz wrote in his letter. How long will he be deemed a squatter if he continues to reside there?

Over the last three days, Gaetz has continuously opposed McCarthy’s bid for the speakership. Even though McCarthy made considerable concessions to the “Never Kevin” party, Gaetz voted Thursday for former President Donald Trump to be the Speaker.