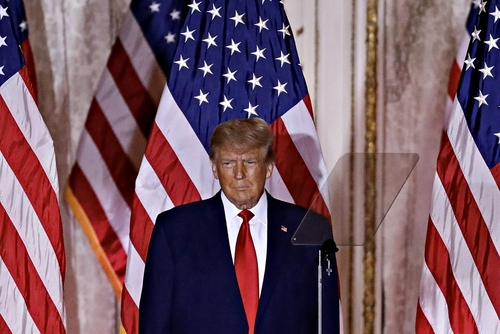 On January 5, former President Donald Trump declared that if he is elected in 2024, he will direct the United States military to defeat Mexican drug gangs and show them “no compassion.”

Trump’s declaration came as President Joe Biden was getting ready to travel to the Mexican border for the first time since assuming office.

On Thursday, Trump released a video claiming that drug-related deaths in the United States were caused by “Biden’s open border policies,” which he termed a “deadly betrayal of our nation.”

Under Biden’s watch, the number of illegal border crossings surpassed 2.3 million in FY2022, according to Customs and Border Protection figures. That number was over twice as high as anything seen under Trump and broke the previous record by about a million.

On Thursday, a video released by Trump claimed that deadly narcotics such as fentanyl are flowing “across our wide-open border” and stealing hundreds of thousands of beautiful American lives. It has been reported that Trump has proposed launching missiles into Mexico to destroy drug labs run by drug cartels operating south of the border.

Since Biden entered office, Trump claimed over 200,000 Americans had died from drug overdoses. Trump said the time had come for America to fight the war on cartels because drug gangs were “waging war on America.”

While calling on Congress to approve laws that would punish drug smugglers and people traffickers with the death sentence, Trump said he would classify cartels as international terrorist organizations and limit their access to the global banking system.

Upon becoming president in 2024, Trump said he would make plans to take down the cartels the U.S. policy. He compared this to the defeat of ISIS and to the fact that, unlike the current scenario today, while he was in office, the country had a very, very strong border.

The ex-president has pledged to utilize the U.S. Navy and other military resources to put a naval blockade on the cartels and prevent them from using local seas to bring narcotics into the nation.

He would direct the Department of Defense to make appropriate use of special forces, cyber warfare, and other overt and covert activities to further undermine cartel leadership, infrastructure, and operations.

Trump said that families numbering in the billions were being wiped out. The drug lords and savage traffickers will never feel safe again when he returns to the White House, Trump has promised.

According to Trump, “We did it once, and we did it better than everyone else.”

Trump’s comments came as President Biden outlined measures he claimed would increase border security and help slow the tide of illegal immigration. His methods include expanding a parole program that allows tens of thousands of individuals each month to enter the country legally.

According to Biden, don’t just show up at the border. Don’t move from where you are; that’s where you may lawfully apply. The Biden administration is extending a parole program that permits 30,000 individuals from those four nations to enter the United States legally every month and work for two years while simultaneously trying to prevent illegal crossings by Cubans, Haitians, Nicaraguans, and Venezuelans.

In recent years, immigrants from those four nations have made up the bulk of illegal border crossers along the United States-Mexico border.

Biden stated that with Mexico agreeing to send back up to 30,000 individuals a month who are arrested attempting to cross the border unlawfully; the United States expects to see a “significant reduction” in the number of people attempting to enter the country illegally through the southwest border.