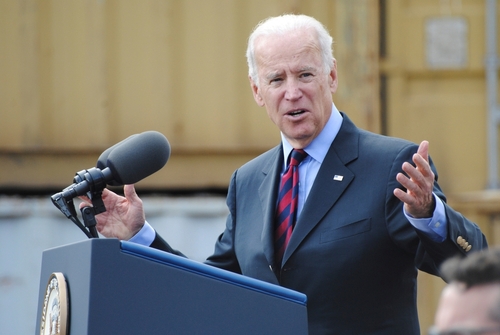 Ronna McDaniel, the Republican National Committee Chairwoman, criticized the President’s visit to the southern border on Sunday as a photo op and said he is only concerned because the problem has become a political liability for him.

McDaniel spoke with reporters en route to Mission, Texas. She will meet with community leaders and speak to local media about the influx of illegal immigrants and its strain on the local economy.

The RNC chairwoman’s trip to Mission overlaps with President Biden’s first border visit of his Presidency on Sunday. He will meet with Border Patrol agents in El Paso, located approximately 800 miles northwest of Mission.

McDaniel told the press that Biden had never visited the area and would spend three hours posing for photos while ignoring the issue. Biden’s damaging policies must not be excused, and his decision to ignore the issue shows he’s not concerned about the problems Americans face.

She said the American people must hold him accountable; the problem won’t disappear. Biden offers meaningless rhetoric without actual enforcement, new Border Patrol agents, or anything to alleviate the situation. The Biden administration feigns to do things they’re not, and three hours doesn’t make up for neglecting the issue for three years.

President Biden has been on vacation more than he has been working on problems that impact Americans. According to McDaniel, since he’ll be in Mexico soon, Biden thought he could swing by El Paso, get his photo op, clean up the streets, and make a faux plan.

To the RNC chairwoman, Biden’s stop in El Paso on Sunday seemed like an afterthought on his way to Mexico City for the North American Leaders’ Summit. There have been indications that in the days leading up to Biden’s visit, officials have boosted detainments and cleared migrant encampments in El Paso, which she said shows that the President is not being given an accurate picture.

Reports linking the detentions in El Paso to the President’s visit are untrue, according to a Customs and Border Protection (CBP) official who told a media source on Sunday that Border Patrol had been conducting heightened patrols before the President announced his visit.

As for McDaniel, she has stated that she does not believe it. The encampments were being cleared out before Biden visited El Paso.

She said it’s being made to look more suitable for the President, but it’ll go back to normal after Biden leaves; McDaniel wants the press to visit the sites to see what his administration has done for his photo op.

McDaniel doesn’t support President Biden’s new immigration plan, which includes a humanitarian parole program initially intended for Venezuelan nationals, including Haiti, Cuba, and Nicaragua citizens. Thirty thousand people from each of the four nations will be able to enter the United States each month for two years under this program, provided they have a financial sponsor and meet other requirements. Any participant who attempts illegal entry will be prohibited from further participation.

The administration has stated that it will make greater use of expedited removal to deport those who do not qualify for expulsion under Title 42 but do not have a valid asylum claim.

According to McDaniel, it’s a false strategy because it doesn’t do anything to address the issue at hand. McDaniel has stated that the CBP requires the funding because of the unprecedented number of illegal immigrants detained at the border in recent months, specifically the 233,000 apprehended in November alone.

McDaniel stated this is a humanitarian, drug, and safety crisis in the United States and that a photo op doesn’t compensate for leadership failures. Furthermore, these communities are overrun, particularly near where she is in the Rio Grande Valley.

McDaniel told reporters that the problem is escalating and Biden isn’t interested in finding a solution because he’s funding his 30,000-a-month amnesty program rather than closing up the border and strengthening Border Patrol. However, she says it can be resolved because it was accomplished under former President Trump’s leadership.