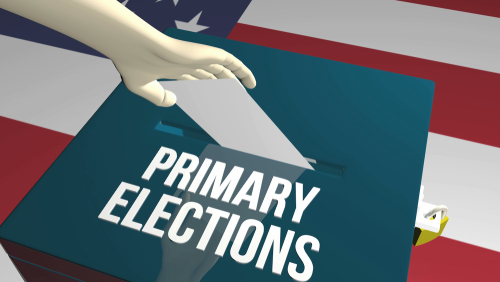 The 2022 primary season is coming to a close the same way it started: with questions about whether or not Republican candidates can win and how former President Donald Trump is still affecting the party.

On Tuesday, Rhode Island, Delaware, and New Hampshire have primaries. After that, the federal races for November will be set. New Hampshire is the most high-profile remaining race: Chuck Morse, the president of the state Senate and former governor, and Don Bolduc, a retired Army general, are the leading candidates for their party’s nomination to run against Maggie Hassan, the Democratic senator, this fall.

Recent primary polls show Mr. Bolduc has a double-digit lead over Mr. Morse. This has led people in the state party and Washington to wonder if he can beat Ms. Hassan in a state that leans Democratic, especially since he has repeated Mr. Trump’s claims that he won the 2020 presidential election.

The Senate is split 50-50, but because Vice President Kamala Harris can break ties, the Democrats are in charge of the Senate. Republicans have long wanted to use President Biden’s average approval ratings against Democrats running for a second term, like Ms. Hassan. The Republicans need to gain just one seat to win back the majority.

All year, Republicans in places like Arizona, Pennsylvania, and Ohio, where Mr. Trump backed first-time candidates for the Senate, faced questions about the quality of their candidates. Strategists say the momentum is moving toward the Democratic candidates in each state. Who, in some polls, are ahead of their Trump-backed GOP rivals by various amounts.

Mr. Trump hasn’t picked a side in the New Hampshire race yet. Corey Lewandowski, a Republican from New Hampshire and Mr. Trump’s former campaign manager, has said that Mr. Bolduc won’t be able to win the seat in November. When asked for comment, Mr. Trump’s spokesman didn’t answer.

Reps for Mr. Morse didn’t answer questions about what they thought. A spokesman for Mr. Bolduc said that the former general could win in November because he is an outsider. The spokesman, Jimmy Thompson, said, This race is between career politicians on both sides of the aisle and outsiders with a new point of view.

Mr. Morse said that Mr. Biden was legitimately elected president, but, as is often the case in the Trump era, much of the difference between the two men comes down to style. At a debate Thursday night, the candidates were asked if they would try to be a fighter or a deal maker in Washington.

Mr. Bolduc said that he was running for office as a fighter. Either you’re with him, or you’re against him, he said. That’s the message he’ll give.

Mr. Morse answered more calmly, stating that he has shown he can do it here in New Hampshire by working with people from different parties who share his values.

The Granite State Poll, made by the Survey Center at the University of New Hampshire, showed that Mr. Bolduc was ahead of Mr. Morse by 43% to 22% last month. Three other candidates polled in the single digits.

Andrew Smith, who runs the center, said that Mr. Morse is running behind because he isn’t known as an activist or a political firebrand, which helped Mr. Trump build a new base of GOP supporters.

Mr. Bolduc had called Mr. Sununu a “Chinese communist sympathizer,” and the governor called Mr. Bolduc a “conspiracy theorist” and said his nomination would help Ms. Hassan get re-elected. Mr. Sununu said, “He’s not a serious candidate.” He said it would be much harder for us to win back that seat if he were the nominee. The Cook Political Report says that Ms. Hassan is more likely to be re-elected than not.

According to Jessica Taylor, what happened in all of these races is that weak candidates stepped up, Trump got involved, or they kept good candidates out of the race. Ms. Taylor works for the nonpartisan Cook Political Report and reviews Senate races. Taylor added that in Arizona, Republican Gov. Doug Ducey, like Mr. Sununu, decided not to run for Senate despite attempts to recruit him.

Senate Majority PAC, a Democratic group that works with Senate Majority Leader Chuck Schumer (D., N.Y.), recently went on air to attack Mr. Morse. AdImpact, which keeps track of political ads, says it had spent $2.2 million there as of Friday. According to an informed source, the group attacked him because, unlike Mr. Bolduc, Mr. Morse has TV ads that attack Ms. Hassan.

Some Republicans said this year’s primaries show that the base is looking for candidates who share their anger with Washington. Voters want people willing to fight right now, said Charlie Gerow, who has been a GOP strategist for many years. That’s probably the one thing he has heard from people all over the country. He said that candidates who made it out of the GOP primaries were a little bit more feisty and down-to-earth than the well-groomed and blow-dried look.