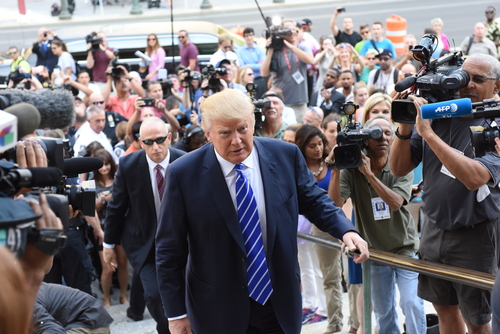 Former President Donald Trump’s attorneys, have asked the Supreme Court to weigh in on the FBI’s search of his Mar-a-Lago estate, paving the way for the highest court in the United States to handle the unusual inquiry.

Mr. Trump’s legal team claimed in a filing Tuesday that an appeals court improperly limited a third-party arbiter’s review of the materials seized by the FBI during its August search, during which agents removed approximately 11,000 documents from the Florida resort, including around 100 marked as classified.

According to the Eleventh Circuit Court of Appeals, the secret records were removed from the jurisdiction of the court-appointed arbitrator, or “special master,” enabling prosecutors to regain access to them.

Mr. Trump’s attorneys did not ask the Justice Department to discontinue its inquiry into the roughly 100 papers. They stated they requested that the records be included in the special master’s examination to guarantee impartiality and public trust in the probe. They further claimed that the 11th Circuit lacked jurisdiction to render its decision.

The application was filed with Justice Clarence Thomas, the 11th Circuit’s chief judge in emergency cases. Justice Thomas allowed the Justice Department one week to produce a rebuttal brief. In the meanwhile, he left the 11th Circuit’s ruling in place.

A special master examines evidence collected by the authorities to decide if it is protected by the attorney-client privilege or should be concealed from prosecutors for other reasons.

Judge Cannon appointed a semiretired senior U.S. District Judge Raymond Dearie to the position and charged him with settling disagreements over the Mar-a-Lago records.

The Justice Department objected to the appointment of a special master, claiming that the months-long review process would impede and prolong a crucial criminal investigation.

The Justice Department claimed in an 11th Circuit appeal that it should have immediate access to the approximately 100 papers with classified marks. A three-judge panel unanimously agreed, ruling that because the data are government property, the Justice Department cannot be barred from accessing them.

Mr. Trump appointed two of the three judges to the court. According to some experts, Tuesday’s application to the Supreme Court faces long odds. Many court matters are close calls. “This is not one of them,” Jessica Levinson, a law professor at Loyola Law School in Los Angeles, said.

Any limitation on the complete and transparent assessment of evidence taken in an unusual search of a President’s residence erodes public faith in our justice system, the brief on Tuesday argues.

Several people familiar with the discussions say that Mr. Trump’s defense team has been dealing with internal disagreements over the appropriate path to pursue. Attorney Chris Kise, a member of Trump’s legal team, has taken a more conciliatory stance, trying to avoid criminal charges now that the government has obtained papers from Mar-a-Lago.

The issue, however, has become a rallying cry for Mr. Trump’s supporters, ranting against the FBI during rallies and fundraising pleas. According to the sources, other lawyers on the team have adopted a more aggressive stance.

In a statement released Tuesday afternoon, the former president said that the National Archives and Archives Administration, the organization in charge of presidential records, had mistreated him.

Attorney James Trusty accused the National Archives of being “very political” during a hearing before Judge Dearie last month.

Evan Corcoran and Christina Bobb, two of Mr. Trump’s lawyers, have garnered criticism from legal experts for a meeting with investigators in June during which they turned over more papers wanted under subpoena. Several sources familiar with the situation said Ms. Bobb signed an affidavit that attested to the fact that  “a diligent search” at Mar-a-Lago to recover all the documents at the heart of the subpoena. The affidavit attests that it was “true and correct to the best of my knowledge.”

However, federal officials assumed additional evidence existed, which prompted the Aug. 8 search order. How it was handled contrasts with a request Mr. Trump made of another lawyer earlier this year, ordering him to notify the National Archives that all of the documents sought had been given over in January. According to two persons familiar with the circumstances, the lawyer, Alex Cannon, declined to make the representation because he did not know whether that was the case and could not certify the validity of the claim regarding said documents. Mr. Cannon’s activities were initially reported by the Washington Post.