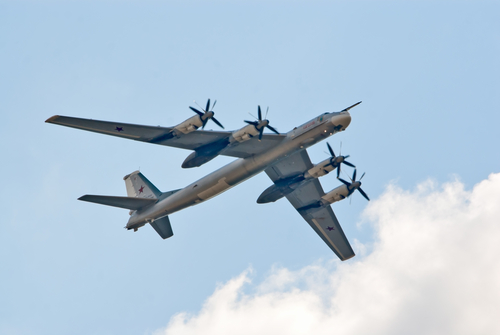 According to a joint U.S.-Canada air defense group, two Russian Tupolev Tu-95 “Bear” bomber aircraft capable of transporting big payloads over long distances were intercepted as they flew over Alaska on Monday.

In a statement issued on Tuesday, NORAD ( North American Aerospace Defense Command ) stated that two Russian aircraft were detected, tracked, positively identified, and intercepted as they entered and operated within the Alaskan Air Defense Identification Zone (ADIZ). The Federal Aviation Administration defines ADIZ as a region of airspace over land or sea in which the identification, location, and control of every aircraft are necessary for national security.

The command stated that it employs a combination of satellites, ground-based and aerial radars, and fighter planes to monitor aircraft within the zone and that it is prepared to use a variety of reaction options in defense of North American and Arctic sovereignty.

The announcement stated, Two F-16 fighter planes from the United States Air Force intercepted the Russian aircraft, which stayed in international airspace and did not breach American or Canadian sovereign airspace.

Though NORAD stated in a press statement that the Russian action was not considered a “threat” or “provocation,” the encounter occurred as Russian ties with the United States and other Western nations have grown more strained since the February outbreak of the Ukrainian civil war. Since the Russian invasion, the United States has provided Ukraine with billions of dollars in arms and training for its military. In response to the attack, the United States has imposed multiple sanctions on Russia and prominent Russian officials.

Capt. Lauren Ott, a spokeswoman for the North American Aerospace Defense Command’s Alaskan Region stationed at JBER, states, on average, they undertake six to seven intercepts each year. Since Russia started so-called out-of-area long-range aircraft operations 15 years ago, the number of intercepts has fluctuated annually, according to Ott.

This year, however, the customary cat-and-mouse game is being played out in a completely new setting — one in which the United States and Russia are not at war but are in conflict due to the United States’ leadership role in helping Ukraine.

The bomber bombers flying near Canada are especially noteworthy in light of a July threat by a Russian politician to recapture Alaska from the United States.

According to the National Archives, Alaska was a part of Russia until the United States acquired the region on March 30, 1867, for $7,2 million. According to Alaska’s official website, Russia’s Big Diomede Island and Alaska’s Little Diomede Island are less than three miles away at their closest point in the Bering Strait. In contrast, Alaska’s Seward Peninsula and Russia’s Chukotka Peninsula are 55 miles apart at their closest point.

As reported by The National Interest, such a distance would not be a problem for the Russian “Bear” bombers, created after Soviet planners in 1950 sought a bomber plane that could carry 12 tons of bombs and go 5,000 miles. According to the newspaper, the resultant Tu-95 is capable of exceeding 500 mph and can go more than 9,000 miles on internal fuel alone.

Bouffard stated in August that he believes the Russians were also sending a message by executing the sorties with only one Il-20 instead of a Tu-95 Bear bomber and a Russian jet fighter, as is typically the case. He claims that the flights allow the Russians to gather intelligence, sometimes simply by observing the American response.

In a recent interview, he stated Russia is attempting to demonstrate that it can still project force in various spheres, including its resolute engagement in Ukraine.