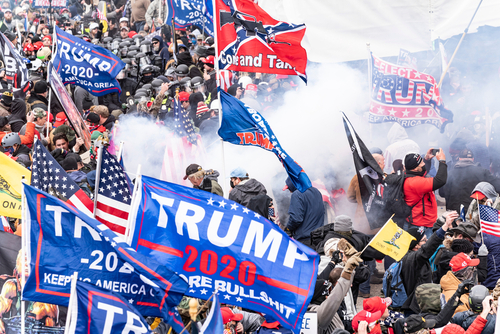 An assault on Capitol Police Officer Michael Fanone results in a 7-1/2-year prison term for a Capitol Rioter. Albuquerque Cosper Head, a Tennessee, construction worker, received the second-longest sentence of any Capitol rioter. An officer was pulled into a crowd of rioters by a Tennessee man on January 6, 2021. He received 7-and-a-half years in jail. This was the second-most severe penalty handed down to a defendant connected to the attack on the Capitol that day.

During an emotional court hearing on Thursday in the District of Columbia, U.S. District Judge Amy Berman Jackson issued the 90-month sentence on Albuquerque Cosper Head, describing him as one of the “most serious offenders” during the Capitol incident.

Mr. Head, a 43-year-old construction worker, pled guilty in May to participate in a group attack on former Metropolitan Police Officer Michael Fanone. Mr. Fanone has extensively discussed the incident and his injuries, which included a heart attack and a severe brain injury.

According to a recent court filing by the Justice Department, Mr. Head forcefully dragged Officer Fanone into the riotous mob and continued to restrain Officer Fanone while another rioter put a Taser to the base of the officer’s skull.

Judge Jackson described Mr. Head’s behavior as some of the ugliest atrocities performed on one of our nation’s saddest days and stated that he pursued the officer as if he were “prey” and a “trophy.”

Since his arrest in April 2021, Mr. Head will be given credit for time served in detention. The Justice Department had requested that Judge Jackson impose the maximum possible term of 96 months, noting Mr. Head’s extensive criminal record, which included convictions for domestic violence and nearly 45 arrests.

Mr. Head’s attorney, G. Nicholas Wallace, unsuccessfully advocated for a 60-month sentence, stating that his client was “embarrassed and remorseful” and accepted responsibility for his acts.

The judge received a letter from the fiancée of Mr. Head, who cried in the courtroom gallery during the hearing, expressing the devastation Mr. Head’s arrest has caused their girls.

Mr. Head refused to speak before the court. Judge Jackson stated that she would not hold this decision against the defendant, noting that his attorney had made an excellent case on his behalf.

According to the Justice Department, around 140 police officers were assaulted throughout the riot, with the assault on Mr. Fanone being one of the most notable occurrences. Mr. Fanone, who resigned from the police force in December 2021, testified in a public hearing organized by a House select committee investigating the attack on January 6, 2022, the previous year.

Mr. Fanone stated that he heard chanting from the crowd that day. Take his gun and kill him. During a congressional hearing, Mr. Fanone advised that he was cognizant enough to realize he was at risk of being disarmed and murdered with his handgun.

In a hearing held last month, Kyle Young, another participant in the attack on Mr. Fanone, was given a seven-year term. Judge Jackson also presided over this case.