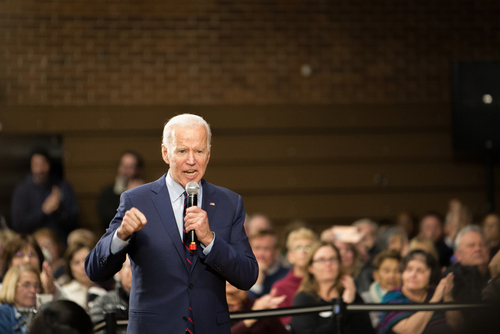 He insulted the people of West Virginia and other coal-producing states by threatening to shut down coal and make them unemployed. He insulted MAGA Republicans by calling them terrorists and a threat to democracy. He has even found a way to accuse MAGA Republicans of the attack on Paul Pelosi, the husband of house speaker Nancy Pelosi. Even though David DePape, the person who attacked Mr. Pelosi, was an illegal immigrant and had no political party affiliation. Biden now knows the attack might have been prevented if he had taken a stronger stance on immigration. Even knowing that the attack on Mr. Pelosi was by an illegal immigrant, Biden still refuses to admit to the border crisis.   However, this latest insult is unprofessional and insulting to the American people.

The latest debacle came while discussing protecting Social Security and Medicare during a speech in Joliet, Illinois; Biden had some words for protesters holding anti-socialism signs outside.

Biden referred to demonstrators carrying anti-socialism posters as “idiots” and warned that if Republicans take control of Congress in Tuesday’s midterm elections, they will attempt to eliminate Social Security and Medicare.

A handful of demonstrators brandished banners, including one that said “Socialism stinks,” outside Biden’s Saturday morning speech in Joliet, Illinois.

During remarks urging voters to reject Republicans at the polls, Biden remarked, as an aside, that he loved the socialist signs that greeted him upon entry. He sarcastically said to the audience to give him a break. “What Idiots!” He continued, No one ever questions doubts his sincerity. Occasionally, he says exactly what he means.

Biden was referring to the road leading to the primary school where Biden spoke was lined with dozens of demonstrators. A second sign stated, “Where is Nancy? ” – an obvious reference to the intruder who struck Speaker Nancy Pelosi’s husband, Paul Pelosi, with a hammer in their San Francisco home.

At the speech, Biden criticized Republican ideas that, according to him, will decimate Social Security and Medicare. He went on to reprimand them for threatening to use the debt ceiling as a weapon to obtain program cutbacks.

He urged participants to vote and to encourage others to do the same.

He urgently stated that currently, we have three days remaining. Three days remain. Vote if you haven’t already, but a large number of people have, he remarked. If you’ve already voted, knock on your neighbor’s door., and bring them to the polls, he continued.