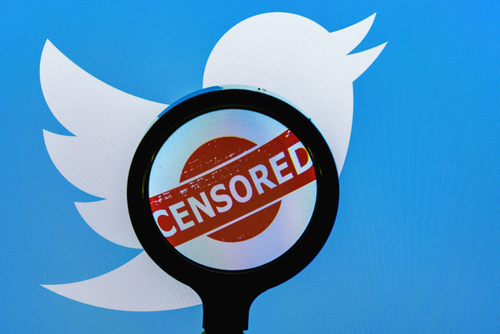 Matt Taibbi promised his readers they would reveal what has not been revealed: the erosion of company standards before J6 and high-ranking executives violating their policies, among other things, while federal agencies continue to interact with them in an ongoing, documented manner.

The third installment covers the period of October 2020 through January 6.

Even Twitter staff knew that banning Trump at the moment was a milestone event in the annals of speech and a historic moment.

He then showed a screenshot of a Twitter employee wondering whether or not this was the first time a sitting head of state had been suspended.

After banning Trump, one Twitter official was noted by Taibbi as saying that the incoming government would not be suspended by Twitter until necessary. This statement suggested that Twitter was prepared to prohibit future presidents and members of the White House — possibly even Joe Biden.

An unidentified executive said that the conduct of Trump and his followers throughout the election and really for 4+ years led to the ban’s implementation.

In the end, they looked at the big picture, Taibbi wrote, but that approach may cut both ways. The conceptual underpinning for Trump’s ban was established in the months before the Capitol riots, but the core of the argument occurred over those three days in January.

It appears that senior executives struggled with rules as the election approached, possibly under pressure from federal agencies, with whom they came into contact more as time went on, and used ‘vios’ as pretexts to do what they would have done anyway, Taibbi reported, referring to the shadowbanning of conservatives (discussed in part two of the Twitter Files).

Taibbi revealed Slack communications from Twitter’s previous head of the Dept. Trust and Safety, Yoel Roth,  who joked about increased communication with government authorities after January 6. Roth joked that he didn’t have “generic enough” appointment descriptions in his calendar to hide the “very interesting” meetings he had.

According to Taibbi’s findings, one slack channel gives a unique view into the developing thoughts of key officials in late 2020 and early 2021. On October 8, 2020, executives launched a channel named ‘us2020 xfn enforcement.’  The channel housed talks concerning election-related deletions, particularly those involving ‘high-profile’ accounts (commonly termed ‘VITs’ or ‘Very Important Tweeters’) until J6.

According to Taibbi, around this time, executives were also plainly consulting with federal enforcement and intelligence agencies regarding the moderation of content relevant to the election.

One Twitter employee to policy director Nick Pickles stated in an email that it had been a slippery process. Pickles was asked whether Twitter should say it “detects’misinfo’ through ‘ML, human review, and **partnerships with outside experts?’

At one point, Pickles can be heard asking if Twitter can just say ‘partnerships,’ and then later writing, “e.g., not sure we’d label the FBI/DHS as experts.”

Roth discussed the censorship of the Hunter Biden laptop story with the FBI, Homeland Security, and the Director of National Intelligence, according to Taibbi.

Roth’s later Slack messages indicate separate meetings with federal law enforcement, according to Taibbi, who shared a screenshot of an exchange between Roth and Apple. In this instance, Roth “ghosts” the FBI and DHS to attend an “Aspen Institute thing” and then a call with Apple.

Another letter was given by Taibbi, where the FBI delivered information concerning a pair of tweets, one of which was from Twitter user John Basham and stated that 2% to 25% of mail-in Ballots were being rejected for errors.

According to Taibbi’s account, the FBI-flagged tweet was then forwarded to the enforcement in Slack, where it was observed that Twitter had quoted Politifact to declare the first item was confirmed to be false and that the second had already been judged no vio on several occasions. After hearing that “it’s entirely normal to have a 2% mistake rate,” the group applies the message “Learn how voting is safe and secure,” Roth provides the final approval.

Later, Taibbi referenced a tweet by former Arkansas governor Mike Huckabee in October 2020. He quipped that he voted using his mail-in ballot and then voted for his deceased parents and grandparents, and they voted just like him!

A Twitter staffer discussed this internally, saying he agrees it’s a joke, but he’s also basically confessing in a tweet a crime.

Although they may exist (Taibbi was informed they exist), no moderation requests were seen in the election enforcement of Slack from the Trump campaign, Trump, the White House, or Republicans in general.

After citing a local story out of Ohio that approximately 50,000 voters received the incorrect ballot, he referenced a tweet Trump wrote in October 2020 stating, “A Rigged Election!” After understanding “the events took transpired” and that Trump’s tweet was “factually true,” Twitter staff decided against adding a “mail-in voting is safe” label to it, as seen by internal correspondence.

The tweet: Big issues and inconsistencies with Mail-In Ballots throughout the USA that Trump sent in the last days before the election was “visibility blocked,” meaning that no one could like or share it.

Here, Taibbi explained that top officials didn’t appear to have a particular infraction, but they quickly blocked a rather anodyne Trump tweet from being replied to, shared, or liked. In response to Trump’s remark, Roth’s team moved fast, earning praise from their boss.

The third batch of the “Twitter Files” includes a message from actor James Woods, who also appeared in the first batch for a remark on Hunter Biden that the DNC marked. This time, Woods is reacting furiously to the warning label that the DNC placed on a tweet about Trump.

Workers at Twitter have debated how to penalize Woods and have proposed that they strike him hard on future vio with a firmer foundation.

Say no to big tech censorship, tweeted Rep. Jody Hice (R-GA), as well as her comment that mailed ballots are more prone to fraud.   In-person voting is more secure. Twitter went with a “soft intervention,” as Roth was worried about a “wah wah censoring” response.

While top officials have allowed previous cases when pro-Biden tweets warning that Trump “may try to steal the election” have appeared, they have decided that this one just expresses fear that postal ballots might not get it in time. In a tweet, Elijah Daniel urged his followers:  not to vote by mail and said that Republicans wanted to steal the election. He recommended dropping off the ballot or voting early.

Twitter “approved” the hashtag #StealOurVotes, which Taibbi explained meant that Trump and the conservative-leaning Supreme Court, now included Justice Amy Coney Barrett, would steal the election since it was “understandable.”

Former Attorney General Eric Holder tweeted in October 2020 that the Trump administration was deliberately crippling the Postal Service. Roth requested that the warning label be removed after it had been placed on the tweet.

Documents suggest that in the months following Trump’s 2020 presidential election loss, Twitter introduced a “deamplification” tool to help identify and suppress the president’s false claims that the election was rigged.

In a December 10 tweet that Taibbi noted, some execs sought to utilize the new deamplification function to discreetly restrict Trump’s reach more immediately. The president’s message was censored. Unfortunately, until the “L3 entities” became online the following day, the team had to utilize older, less aggressive tagging technologies, at least for that day.

According to Taibbi’s tweets, the ban will come when other routes are exhausted, indicating that Twitter was already taking measures in 2020 to limit Trump’s online activity well before J6. “Bots” are often used by Twitter executives in internal documents (e.g., “let’s put a bot on it”). This can refer to any automatic heuristic moderation rule, such as taking action if someone in Brazil uses the words “green” and “blob” in the same phrase.

A “bot” was added by Twitter moderators to a claim by Trump on Breitbart so that it could “invisibly watch” both Trump and Breitbart. he said.

Taibbi took the trouble to define some of the jargon used by Twitter censors. In this context, “bounce” referred to a 12-hour suspension of a Twitter account. It is called an “interstitial” when a visible tweet has a physical label superimposed on top of it. An “interstitial” used for “public interests” is known as a “Public Interest Interstitial” (PII), whereas “Proactive V” denotes filtering that only allows certain types of content to be seen.

Before the riots, Taibbi explained, Twitter was engaged in an essentially insane/impossible undertaking, seeking to establish an ever-expanding, allegedly reasonable set of rules to control every imaginable speech circumstance that can happen between people. The project’s founders were blinded by their groupthing. They came to believe (honestly) that it was Twitter’s obligation to regulate, as much as possible, what people could speak about, how often they could talk about it, and with whom they could talk about it.

On January 6, Taibbi explained the “panic” that had broken out within the organization. The “bouncing” of Trump’s account is shown. In his first company-wide email on January 6, Gadde reported that three Trump tweets had been bounced and, more critically, expressed a commitment to use legitimate ‘violations’ as a foundation for any prospective permanent suspension.

Here’s a screenshot of some angry back-and-forth after Trump tweeted, “Go home with love & in peace.” to his fans.

One worker explained that it was upsetting them.

Another chimed that Trump was an awful human being.

A screenshot that Roth posted demonstrated that Trump had been subjected to a “TON” of “duplicate” bot attacks.

According to journalist Michael Shellenberger, Twitter internally considered the fluid changes it made to its policies on Saturday. Bari Weiss, editor at The Free Press, will write on Sunday about the praise Twitter received from “our partners” in Washington.