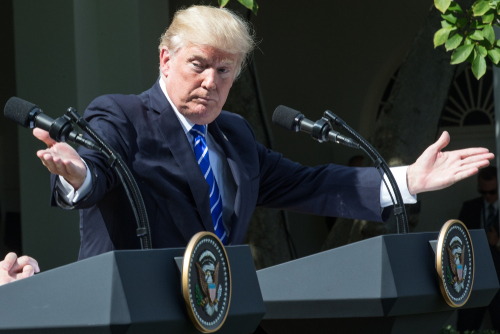 Former President Donald Trump replied to the unanimous vote of a committee on January 6 to refer criminal charges against him. Monday, the committee recommended that the Department of Justice indict former President Trump on four charges of attempting to overturn the 2020 presidential election results.

Trump replied on both Monday and Tuesday to the committee’s suggestions.

According to Trump, the “fake charges” filed by the extremely hostile Unselect Committee on January 6 have already been submitted, prosecuted, and tried as Impeachment Hoax Number Two. “I WON” decisively. Who’s up for a round of Double Jeopardy?

Trump went on to add that the People realized that the Democratic Bureau of Investigation, or DBI, was attempting to prevent him from running for president because they knew he would win and that this whole issue of prosecuting his is a partisan attempt to marginalize the Republican Party and him just as impeachment attempted to do.

Trump proceeded by asserting that the 2020 election was stolen and by calling for the prosecution of President Joe Biden and his son Hunter.

Trump wrote again on Tuesday morning, claiming the elections were stolen, which was why protestors rushed to and stormed the Capitol.

As a result of the special committee’s unanimous recommendation, Trump may be charged with obstruction of justice, conspiracy to make a false statement, conspiracy to defraud the country, and inciting or assisting a rebellion. NBC News initially reported the committee’s move. The recommendation is non-binding, and the DOJ is launching an investigation and will eventually decide whether to pursue the charges recommended by the January 6 committee.

Members of the committee, including Georgia Secretary of State Brad Raffensperger and Department of Justice (DOJ) officials Jeffrey Rosen, Richard Donohue, and Bill Barr, highlighted Trump’s efforts to pressure state and federal authorities to investigate and bring charges of fraud.

Rep. Adam Schiff, a Democrat from California, stated Trump built on his continual repeating of the ‘Big Lie.’ According to Schiff, Trump engaged in an unprecedented attempt to disrupt the joint session on January 6, the occasion where Congress would confirm his “electoral defeat.”

In addition, the committee recommended that the House Ethics Committee examine Kevin McCarthy of California, Jim Jordan of Ohio, Andy Biggs of Arizona, and Scott Perry of Pennsylvania for declining to testify despite receiving subpoenas. It appears unlikely that the committee, composed of an equal number of Republicans and Democrats, will act on the reports before the 117th Congress ends on January 3, 2023.

Over 900 people have been charged with crimes associated with the Capitol incident. The federal government seized the cell phones of Perry, former Department of Justice staffer Jeffrey Clark, and attorney John Eastman, who advised Trump that Congress might overturn the Electoral College slates.

The Department of Justice must complete its investigation before deciding whether to formally bring charges. Additionally, the Republicans will take the majority in the House in January. A Republican-controlled House may influence whether the DOJ precedes with the charges or not, especially as they have already indicated that they intend to investigate the FBI raid on Trump’s Fl estate.