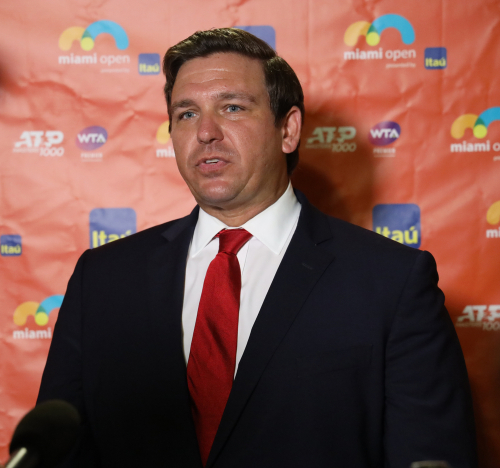 Florida Governor Ron DeSantis blamed the “woke ideology” and “soft-on-crime” policies of Democrats in other states for the rapid expansion of fellow Americans into his state.

On Tuesday, the newly re-elected Republican governor delivered his second inaugural address, during which he criticized the policies of Democratic-run cities and states.

DeSantis, hailing Florida as the “promised land of sanity,” has been vocal about his support for law enforcement and opposition to the “defund the police” movement.

DeSantis pledged that no matter what, Florida would always stand behind law enforcement and oppose “soft-on-crime” policies that put communities in danger.

Florida Governor Ron DeSantis blamed the “woke ideology” and “soft-on-crime” policies of Democrats in other states for the rapid expansion of fellow Americans into his state.

On Tuesday, the newly reelected Republican governor delivered his second inaugural address, during which he criticized the policies of Democratic-run cities and states.

The increase brought the state’s total population to 22,244,823. Florida had the highest percentage growth in population for the first time since 1957.

According to the Census Bureau, the Northeast and Midwest, which contain blue states, are losing population as people move to the South and West. Texas added 30,029,572 people to its population, making it the most populous state in the country. Only two states, Texas and California, now have populations greater than 30 million.

DeSantis used the popular image of the 50 states as a “laboratory of democracy” to argue that Florida’s success demonstrates the failure of the Democratic Party’s experiments with radical-left policies.

According to De Santis, many of these municipalities and states have embraced fleeting ideology at the expense of more traditional values. Further, he claimed that Democrats’ coddling of criminals and attacks on law enforcement had harmed the public and that Democrats’ unreasonable demands on taxpayers had financed incomprehensible increases in government spending.

He went on to say that the Democrats had harmed education by putting partisan interest groups ahead of the needs of students and parents and that they had imposed medical authoritarianism under the guise of pandemic mandates and restrictions that were not backed by evidence.

DeSantis concluded that Republicans are not followers of the woke ideology and want normalcy, not philosophical lunacy. They will never give in to the woke mob or allow reality, facts, and the truth to become optional.

With the release of his memoir about his time in public service expected for late February, political observers will see DeSantis taking another step toward a potential presidential run in 2024. “The Courage to Be Free: Florida’s Blueprint for America’s Revival” is the title of DeSantis’ autobiography.

Many current and former presidential candidates feel obligated to write a book as part of their campaign.

The governor has sent two more hints about a possible national campaign in the past month. DeSantis has escalated his war against the manufacturers of the COVID vaccine by demanding a grand jury investigation into any potential wrongdoing on their part. In addition, DeSantis has recently resumed his Google and Facebook ads, which he aimed at a nationwide audience.

Last month, Governor DeSantis met with some of his top donors. He will have another chance to express his gratitude to those who have supported his political career through the inauguration festivities.

DeSantis will likely refrain from making any statement regarding a potential presidential campaign in 2024. Until the end of the Florida legislative session in May, the source told the media, no announcement would be made.