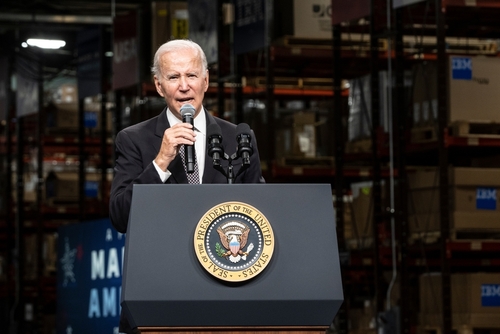 “Classified” papers from Joe Biden’s Vice Presidency were discovered at a think group connected to the current President. The same purported “crime” that led to the FBI raid on former President Trump’s Mar-a-Lago estate. According to CBS News, the records have prompted a “review” by the U.S. attorney’s office.

Unnamed sources told CBS News that Attorney General Merrick Garland ordered the Chicago U.S. attorney’s office to investigate the Penn Biden Center’s sensitive materials. According to the sources, the group of about ten documents comes directly from Vice President Biden’s office at the White House. CBS News reports that the FBI is helping the U.S. attorney investigate this case.

The story goes that Richard Sauber, special counsel to the President, acknowledged that on November 2, just before the midterm elections, personal attorneys for Mr. Biden detected the classified data.

Biden’s attorneys were packing paperwork kept in a locked closet as they prepared to evacuate the Penn Biden Center in Washington, D.C., said Sauber in a statement to CBS News. There was a box with other non-secret paperwork that the documents were stored in. The sources provided neither the contents nor the degree of classification of the confidential papers. According to a CBS News source, the files do not include “nuclear secrets.”

The President’s counsel discovered these records, Sauber stated. The Archives had never received a request or inquiry about the files. Since then, the President’s legal team has worked closely with the National Archives and the Department of Justice to complete a transfer of all relevant Obama-Biden Administration materials to the Archives.

According to one informed source, National Archives personnel subsequently informed the Justice Department.

In Washington, D.C., about a mile from the White House sits the Penn Biden Center, a think tank associated with the University of Pennsylvania and named for the President. CBS News has reported that Lauch’s investigation would look into how the files made their way from Biden’s vice presidential office to the Penn Biden Center.

CBS News’ request for comment to the Penn Biden Center and the University of Pennsylvania went unanswered. No representative from the National Archives was available for comment. The three attorneys tasked with overseeing Biden’s vice presidential records — Robert Lenhard, James Garland, and Dana Remus — did not respond to voicemails or emails requesting comment. The FBI and the Department of Justice both declined to provide a statement.

A person with knowledge of the situation indicated that the Justice Department’s investigation had been brought to the attention of the ODNI (Office of the Director of National Intelligence). The investigation finds “parallels to the Justice Department’s pursuit of Donald Trump’s presidency records” in the Penn Biden Center case. The FBI carried out a search warrant at Mar-a-Lago in August and found several sensitive records there.

President Biden was asked about the Mar-a-Lago documents during his September “60 Minutes” interview. How on earth could that occur? The President questioned how someone could be so careless. And it’s “totally irresponsible.” Biden added.

The “nuclear secrets” the Washington Post claimed in August to have been in Trump’s hands have not been uncovered during the FBI raid at the request of the National Archives and Records Administration. An assessment by agents and prosecutors found no clear economic interest in the Mar-a-Lago records, sources familiar with the subject said, according to a subsequent Post piece.

The federal authorities examined the classified documents found in Trump’s Mar-a-Lago home and private club, looking for any similarities or patterns in the type of information contained in them.

That analysis has not discovered any clear financial advantage to the sorts of secret material in Trump’s hands, these sources said, according to the paper. So far, the FBI’s interviews with witnesses have not revealed evidence that Trump has attempted to improperly leverage, sell, or utilize government secrets. According to these sources, the former President was driven instead by a more primal impulse to hold on to what he rightfully saw as his possessions. Two of these witnesses reported that Trump frequently claimed ownership of the files, claiming in obscene words that they were his and not the government’s. They thought that Trump’s ego and stubbornness were the key rationales for the potentially illegal behavior, the study claimed.

Obstruction of justice and contempt of court are two process offenses that the Department of Justice has tried to pin charges on President Trump for. It’s the handling of current  Biden and former President Donald Trump that illustrates a clear example of its double standard, which is obvious to the American people.