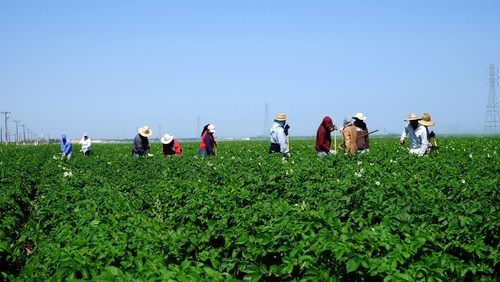 According to the Post Millennial, the Department of Homeland Security announced on Friday an expedited deportation “relief” process for illegal immigrants who denounce their employers. In other words, illegal aliens should be rewarded for reporting American residents who employ them.

Secretary of Homeland Security Alejandro Mayorkas spoke to employers of illegal immigrants as “predatory actors” and threatened to hold them accountable.

The Post Millennial noted that the revised policy elaborates the ideas Mayorkas established in a document from October 2021 addressing immigration enforcement in the workplace.

Mayorkas stated in the email that the Department of Homeland Security is focused on “delivering more severe repercussions” to “unscrupulous companies who abuse the vulnerabilities of illegal employees.” One of the declared purposes of the agency is to improve workers’ willingness to report violations of the law by exploitative employers.

According to the DHS website, under existing laws, a noncitizen given deferred action may apply for and get employment permission for the duration of deferred action if they establish an economic requirement to

Unless the “noncitizen” is a drug dealer, human trafficker, or independently rich, he will likely have an “economic necessity to work.”

So an employed illegal immigrant in the United States who informs his employer receives a stay of deportation and is then permitted to work in the country. The “noncitizen” is rewarded, while the “citizen” is penalized.

Sounds advantageous for illegal immigrants. Send it out by radio waves. Come one, come all. Get rewarded for betraying your boss.

Yes, employers of these migrants violate the law and should be held responsible. The law protects citizens from illegal workers’ unfair competition in the workforce.

Illegal immigrants, on the other hand, receive a complete pass. They are permitted to remain in the nation, can lawfully find employment, and must presumably pay taxes on their earnings.

Employers of “unauthorized” workers defraud the government out of taxes. In a “spend, spend, spend” regime, the government needs as much revenue as possible, requiring taxes from all individuals, even illegal immigrants.

The Department of Homeland Security describes “deferred action” as a kind of prosecutorial discretion to delay removal action (deportation) against a noncitizen for a certain time. In addition, DHS may discontinue delayed action at any moment, at its discretion, as stated.

The questions that need to be asked are: what does “a certain time frame” mean? A year? How many years? A hundred? What about “at any moment, at its discretion” termination of postponed action? Why would DHS deport a “noncitizen” who is working and behaving himself in the United States?

These migrants are subject to deportation at the discretion of the government. They will comply with government requirements and may feel compelled to vote for Democrats who would either maintain the program or grant them full citizenship. In other words, the Biden administration is developing a flock that might number in the millions.

But migrants are not the true winners in this scenario. They are, in fact, victims. Illegal immigrants who refuse to comply with DHS are exempt from payroll taxes and are not subject to government control. The administration would seek to cull these people from the present influx across the southern border.

How long will it take the refugees leaving communist totalitarian horrors to understand that they may be heading into the same thing?

Mayorkas must be removed from office.