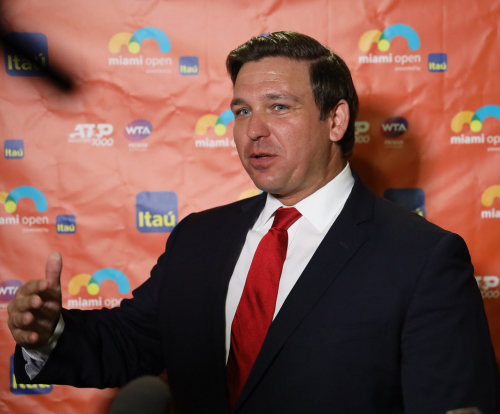 The study demonstrates that if the election were held today, Ron DeSantis would defeat Biden, yet many voters still have not heard of him, and those that do may recognize him for his spat with Disney.

Other Republican Party members have not yet announced their candidacy for the Republican presidential nomination in 2024. Only two names have risen to the top of every poll, and according to a recent survey, only one of the two Florida-based conservatives would defeat President Joe Biden in a head-to-head matchup.

Former President Donald Trump swiftly declared his candidacy for president, and after two months, with the exception of former National Security Advisor John Bolton, he is the only significant contender.

Speculation has flared over the possibility of Florida Governor Ron DeSantis opposing him in a Republican primary, with surveys indicating that Republican voters favor both candidates. According to a study conducted by WPA Intelligence in early January, not only was DeSantis predicted to win in a race against Biden (where Trump would lose today), but more than one-third of respondents needed help to correctly identify the United States’ governor.

When more than 1,000 likely voters were asked to select between the current and previous presidents, 49 percent liked Biden, and only 41 percent favored Trump’s return. In contrast, DeSantis narrowly defeated Biden by three points, 45 to 42 percent.

Most respondents had voted for Trump in the last election, while fewer had backed Biden, with 42 and 46 percent, respectively. These results portrayed a picture of a party prepared to move on to other endeavors. This group consisted of respondents who identified as “extremely” or “somewhat” conservative, as opposed to liberals (38 to 29 percent) and moderates (33%).

Less than two-thirds of participants could recognize DeSantis from his image alone. This suggests that his name ID has room for improvement (only 80 percent among likely voters). This is great news for DeSantis because he has the opportunity to gain additional support as the only Republican candidate with a positive net favorability. DeSantis had a net favorability of +2% among all likely voters, in contrast to Trump’s -21% and Biden’s -10%. Biden had a favorable rating of +17 and +5 among non-white and young voters, respectively, compared to Trump’s unfavorable ratings of -39 and -34 among the same categories. The governor of Florida also defeated Trump in both categories, with negatives of 12 and 18 percent, respectively.

Notable is the fact that an even bigger proportion of these groups have never heard of DeSantis: over a quarter of each category.

As for DeSantis running for president, it remains to be seen since the governor was insistent during his re-election campaign that his emphasis was on Florida. Some predict he might enter the race as early as the spring. In contrast, others feel he will at least keep his word through the parliamentary session, possibly making an announcement after it closes in May or as late as July, possibly around Independence Day.