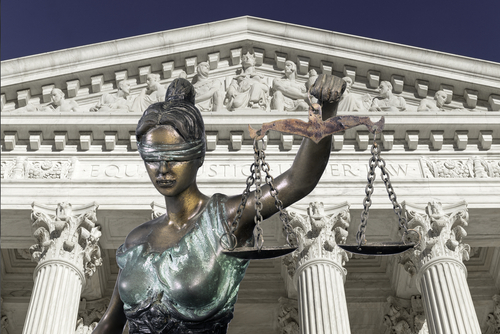 After the Supreme Court’s investigation into who leaked the draft about overturning Roe vs. Wade, Trump called for the journalists at Politico to be locked up.

A recent report from the U.S. Supreme Court states that the Court has been unable to identify the person responsible for leaking a draft ruling to Politico last year, which has prompted various responses from conservatives.

Prof. Jonathan Turley of GW Law School tweeted that the inability of the Court to identify the leaker was “scary.” According to the study compiled by the Supreme Court, there are more than eighty potential suspects for the Dobbs leak, and none of them have been ruled out. It’s a confession nearly as unsettling as the leak itself, according to what Turley had to say.

This will undoubtedly reignite debate over whether or not the FBI should have been given primary responsibility for the probe. Just a short distance away from the Court is the most prestigious forensics investigation agency in the whole world. There is no longer any reason to believe such immoral behavior will be discouraged. So far, the leaker of the drafted opinion has managed to do more than merely stay under the radar.”

Former President Donald Trump has demanded the imprisonment of the journalists responsible for publishing a leaked draft judgment of a landmark abortion verdict in May.

Hours after the Supreme Court delivered a report indicating that investigators had not yet identified the leaker, Trump commented on his social media network, Truth Social, “Arrest the reporter, publisher, editor – you’ll have your answer soon.”

The ex-president emphasized that the congress “stop playing games and wasting time!” On May 2nd, Politico was the first to post a copy of the unfinalized ruling in the landmark case of Dobbs v. Jackson Women’s Health Organization. A day after the leak was revealed, Chief Justice John Roberts ordered a court marshal to investigate the leak. After eight months of investigation, almost one hundred court employees were interviewed, and the Court’s technological infrastructure was evaluated—the Court was still unable to identify the source of the leak.

Trump expressed his displeasure with the news. Trump said that the Supreme Court had admitted that even with the help of the FBI’s “crack” agents, they had been unable to determine who had leaked information about the Roe v. Wade controversy. Trump added that they would never find the truth. Trump expressed his belief that the matter was important. Trump’s solution was to go to the reporter and demand to know who it was. If they fail to answer, jail them until they do. Perhaps the publisher and editor should be added as well. Trump emphasized that the nation must end the tampering immediately; that information like this can’t afford to slip.

Some Supreme Court personnel had discussed the document with their wives or partners, which investigators have deemed a breach of the Court’s confidentially standards but have been unable to trace back to the original source of the leak. Restricting the dissemination of important papers by hard copy, email, and external cell phones were just a few of the recommendations made in the study to improve the Court’s record-keeping and security standards.

Justice Samuel Alito’s draft opinion indicated that most of the Court were prepared to reverse Roe v. Wade, which legalized abortion nationwide. Their decision was issued on June 24th, resulting in the reversal of Roe v. Wade. Since then, at least 13 states have outright outlawed abortion or severely limited access to the practice.