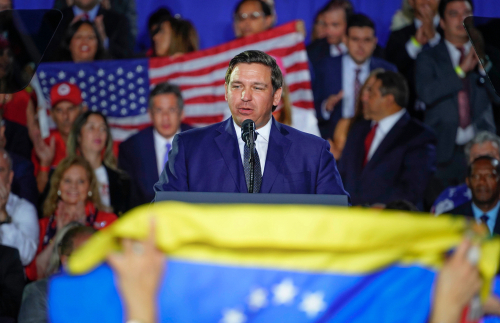 As part of his campaign for a second term in Florida, the third-largest state, Republican Gov. Ron DeSantis is seeking to put a slew of loyalists on school boards. At a campaign event on Sunday, DeSantis told about 430 enthusiastic supporters, “We need help at the local level.” He said you guys could do a lot by getting out and voting.

Despite their nonpartisan status and lack of attention, 29 conservative candidates have been endorsed by the governor for school board races on Tuesday.

After schools across the US stayed closed during the Coronavirus outbreak, school board elections have gained attention from frustrated voters. As a result of the energy behind these races, DeSantis and other Republicans have moved to restrict school curricula or practices based on race, gender, or sexual orientation.

DeSantis, whose political committee donated to the school board candidates, said Florida wouldn’t surrender to the woke. We will prevail in Florida, and woke will die there.

According to Lieutenant Governor Jeanette Nuez, who also spoke at the event, the DeSantis administration focuses heavily on education because it is the key to all opportunities. She said that we need you all to join us in this battle to reclaim our school boards.

As he called the Democratic Party a “woke dumpster fire,” DeSantis said he would double down on many of the education issues he fought for over the last four years, which are laid out on his website in a 10-point education agenda. As part of his speech, DeSantis vowed to reject school lockdowns and to “keep woke gender ideology out of schools.”  He also pledged to support higher teacher salaries. According to the National Education Association, Florida’s average teacher salary is No. 48 in the nation, even though state lawmakers and the governor raised their salaries this year.

DeSantis proposed reducing Florida’s teacher shortages by providing firefighters, paramedics, and police officers with temporary teaching certificates. Andrew Spar, president of the Florida Education Association, said the idea is “shortcutting” and doesn’t address the root cause of the problem.

The tour began in Doral in Miami-Dade County and included stops in Sarasota, Volusia, and Duval counties. According to the DeSantis campaign, a crowd of more than 1,200 people attended the Sarasota event.

Voters will decide on Tuesday who will challenge DeSantis in November. Will it be Nikki Fried, the state’s agriculture commissioner, or Charlie Crist, who was the GOP governor of Florida from 2007 to 2011. Tuesday’s primary will determine the Democratic nominee for governor.

DeSantis has campaigned for Republican candidates in other states, including Doug Mastriano for governor in Pennsylvania and JD Vance for US Senate in Ohio. A White House bid is widely rumored for DeSantis. In addition to burnishing their brands as leaders of their parties, presidential hopefuls form political allegiances by stumping for candidates in other states, especially battleground states.

In his roughly 30-minute speech, DeSantis discussed his role in establishing new education standards that reduced testing and required school districts to show how they select textbooks. Additionally, despite federal health officials’ concerns, DeSantis praised his decision to reopen schools during the pandemic in fall 2020. Despite months of backlash, many blue states eventually followed suit after concluding that school closures were more harmful than beneficial. He said that having three young children has influenced the governor’s opinion of schools.

According to him and his wife, Casey DeSantis, it makes them more aware of many of the issues parents face today. Many attendees expressed enthusiasm about the governor’s political future at the rally.

DeSantis also praised policies that have sparked lawsuits and backlash in his speech. The bill is nicknamed “Don’t Say Gay” because it bans discussions about sexual orientation and gender identity in schools, especially for kindergarten through third-grade children. His supporters believe that children should not be exposed to this ideology and that exposure to this ideology will rob them of their innocence.

Because the bill contains ambiguous language banning such instruction “in a manner that is not age appropriate or developmentally appropriate,” critics claim it may extend to higher grades. They are concerned that LGBTQ teachers’ speech will be repressed and that students will be exposed to families who do not accept them.

In his campaign rally, DeSantis attacked “critical race theory,” which he defined as teaching children to hate their country and hate each other because of their race. Republican leaders have used the term to describe race-based discussions and training they say are linked to Marxism.

Critical race theory formally examines racism in US institutions that arose from slavery and the Jim Crow era. Law schools mainly teach it, and Democrats accuse politicians who support bans of whitewashing history.

Governor DeSantis is determined to stop woke ideology in the sunshine state, and he has a lot of people supporting him. Despite all the controversy, he remains popular within the state, and many people believe he has a real shot out of the White House in 2024.

6 thoughts on “DeSantis – The Woke Die in Florida”